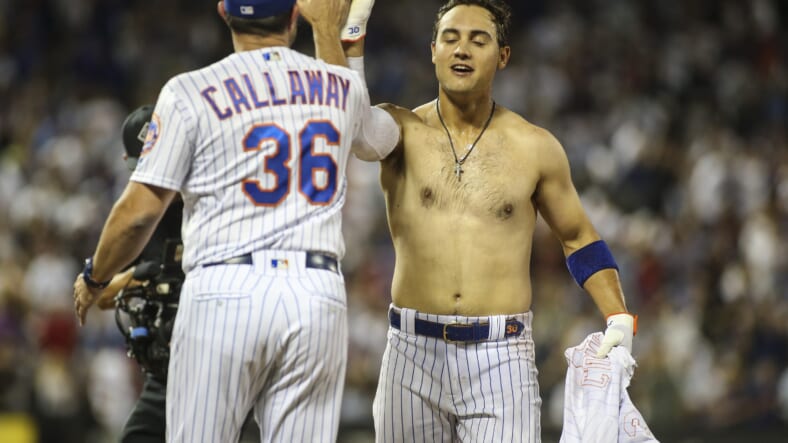 Michael Conforto has been just about everything the New York Mets hoped he would be when they selected him with the 10th overall pick in the 2014 MLB Draft. In 2019, Conforto finished the season with 33 home runs, 92 RBI and 90 runs scored.

Still just 26, Conforto sees himself as an ascending player. With two years of team control left, he is aiming for free agency and his numbers are trending up, meaning by the time he reaches free agency in 2022, he’ll be in for huge payday.

Conforto is using the model set by Washington Nationals third baseman Anthony Rendon, who peaked in his final two seasons in Washington, earning him a seven-year, $245 million megadeal from the Los Angeles Angels.

â€œI look at guys like Rendon — heâ€™s just the first one that comes to mind to me, being a guy that really doesnâ€™t have crazy plus power, doesnâ€™t really have crazy plus speed,â€ Conforto told Mets.com. â€œHeâ€™s just a really, really, really tough guy to get out, a really tough guy to get off-balance, and thatâ€™s what Iâ€™ve always felt like I could be. And I have been in the past. Iâ€™m not going to compare myself to — I donâ€™t want to compare myself to him. Heâ€™s put up six-plus incredible seasons. But thatâ€™s who Iâ€™m striving to be.â€

In order for Conforto to be anywhere near Rendon territory, he’s going to have to raise his batting average and OPS significantly. He has hit just .257, .243 and .279 respectively over the past three seasons. By contrast, Rendon batted .319, .308 and .301.

Conforto has said he’d like to be a Met for his entire career. Economics and his performance will dictate that. So will his agent, Scott Boras, who usually advises his clients to test the free agent waters over taking hometown discounts.

â€œEveryone always says that Scott is a big free agency guy and heâ€™s a big fan of that, but Scott â€¦ is obviously going to give me the best advice that he feels he has for me as a player, and for my career,â€ Conforto said. â€œUltimately, itâ€™s my decision. I think itâ€™s somewhat of a misconception about Scott and his clients. He wants whatâ€™s best for us. Heâ€™s going to give us his best advice. But at the end of the day, heâ€™ll tell you, â€˜Itâ€™s my clientâ€™s decision.â€™â€

We’ll see. First things first, though. Conforto has to keep improving or the Met’s hometown discount just might be his best offer.