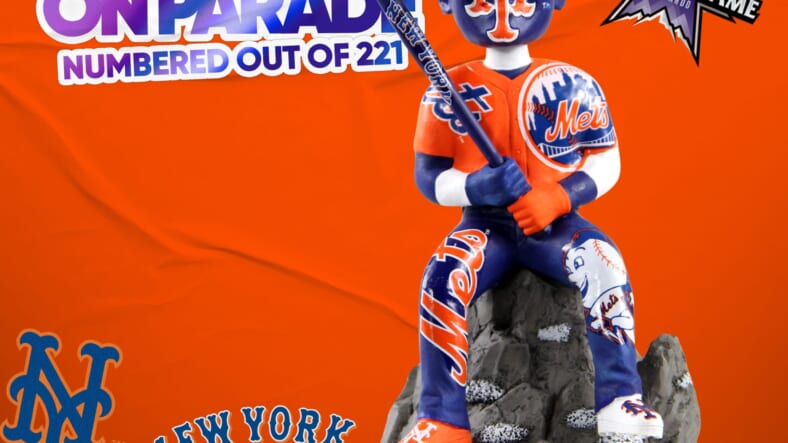 The 2021 MLB All-Star Game is right around the corner, and FOCO has released another collector’s item for New York Mets fans. Their newest bobblehead features a seated figure wearing a uniform and holding a baseball bat. It also has a repeat pattern design with a multi-team logo display across the body and bat of the seated figure. Since the game is at Coors Field this season, the figure is seated on a mountain base with forest accents.

There are only 221 bobbleheads on sale for $50.00 apiece. For those unfamiliar with FOCOâ€™s â€œBobbles on Paradeâ€ series, it is a revival of an MLB All-Star game tradition that began nearly two decades ago. In 2003, inspired by CowParade and FOCO started to producing commemorative bobbleheads with team and city-specific designs before the Midsummer Classic.

FOCO even created life-size figurines that were placed around the city hosting the MLB All-Star Game in some years. As fans piled into the host city from across the country for the All-Star Game festivities, fans would be encouraged to participate in a â€œscavenger huntâ€ and locate the giant bobbleheads for all 30 Major League teams. Make sure to move quickly and take advantage of the opportunity to get one of these unique bobbleheads.