Division series on road with Braves and Phillies, big week ahead for New York Mets 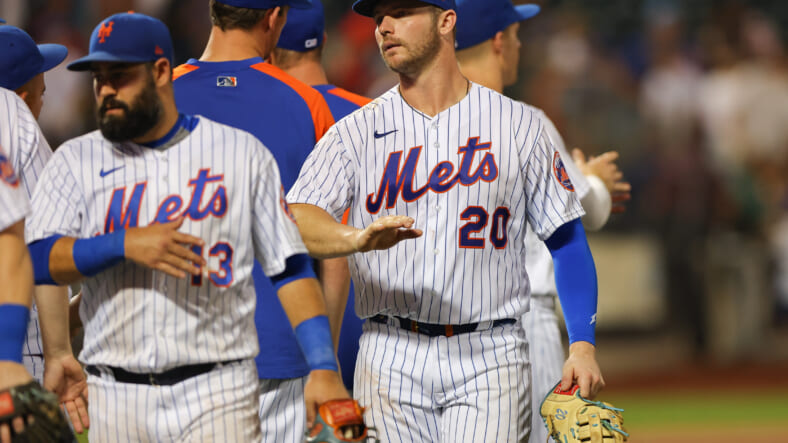 Since the last week of July, the New York Mets have played some incredible baseball and against some quality opponents as well.

Over their last 20 games, the Mets are a remarkable 17-3 while playing against top-level teams like the New York Yankees, Atlanta Braves, San Diego Padres, and Philadelphia Phillies. In the order mentioned, those teams are fourth through seventh wins for wins in all of baseball. The Mets have won six consecutive series.

Currently, the Mets are 35 games over .500 with a 75-40 record. They are tied for the second-most wins in all of baseball. Still, even after taking four of five with the Braves at Citi Field, they have won six straight, and the Mets only find themselves with a 5.5-game lead. Even with their 17-3 record over the last 20 games, this week is quite a pivotal one for the Mets, to say the least.

Previewing this week for the Mets

Starting tonight, this Monday, all the way through Sunday, the Mets play eight games and do not have a day off. After playing the Braves and Phillies at Citi Field, they now have to go play them both on the road. The Mets play four games tonight to Thursday down in Atlanta. Then, they go to Philadelphia for four from Friday through Sunday, with a day-night doubleheader Saturday.

To kick off this huge week, Carlos Carrasco takes the mound looking for his 14th win of 2022. The Mets go up against Spencer Strider at 7:20 PM tonight, who they accomplished much success against in their five-game series last week.

Tuesday through Thursday, the Mets’ probables are Taijuan Walker, Max Scherzer, and Jacob deGrom. Getting continued dominance from the starting rotation of the Mets will, of course be the first key to winning this four-game series with the Braves.

Starting Friday night against the Phillies, Chris Bassitt is the probable starter. Carrasco is set for the first Saturday. From there, with no days off this week and eight games, it gets tough for the final two games of the series with less than ideal rest for Walker and Scherzer. It makes starting this week off fast that much more important for the Mets.

Reliability from the bullpen will be crucial throughout these two four-game sets. The Mets starters should rise up to the challenge, leading to favorable situations for the relievers to enter. Edwin Diaz will likely be called upon in most of these games, which are probably going to be tight.

Lastly, continued big games from the Mets’ top hitters will be necessary. The headliners obviously being Pete Alonso, Francisco Lindor, Starling Marte, Brandon Nimmo, and Jeff McNeil. When in the lineup, depending on the opposing starting pitcher, quality at-bats and timely hits from Daniel Vogelbach, Tyler Naquin, Mark Canha, and Darin Ruf could make a difference.

Infielders Luis Guillorme and Eduardo Escobar have both sustained injuries over the last two days, testing the depth of the Mets lineup and impacting the defense. Reportedly, the Mets have not ruled out calling up Brett Baty. Mark Vientos, however seems unlikely.

In the end, this week could potentially give the Mets an even bigger division lead with more momentum or allow the Braves and Phillies to stay in the division race. The swing by the end of this week could be huge for the Mets. They will have to keep on playing the great baseball they have been.