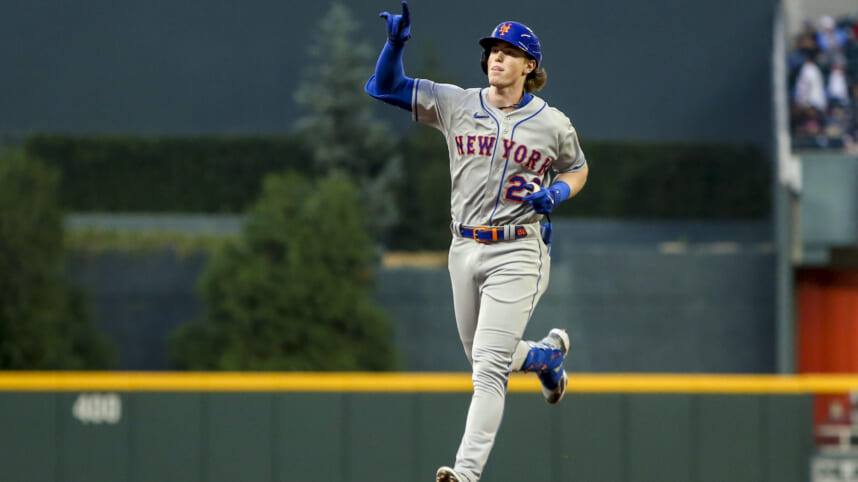 Following two losses to start a crucial division series, the New York Mets got a key road win last night. In the third out of four with the Atlanta Braves, the Mets won a 9-7 thriller. This win puts the Mets now at 76-42 on the year with a 4.5-game lead in the NL East.

The Mets made a move they simply had to. Calling up top prospect Brett Baty to infuse the lineup following recent injuries to Luis Guillorme and Eduardo Escobar was a no-brainer.

The 6-foot-3, 210-pound 22-year-old showed off his beautiful swing on the first cut of his MLB career. On a breaking ball left over the middle of the plate, Baty made Jake Odorizzi pay. Baty hit a two-run homer to right field in the second inning, giving the Mets a 4-0 lead.

Baty’s third at-bat was his first against a left-handed pitcher. First pitch swinging, Baty hit a fastball hard the opposite way with an exit velocity of 113 MPH.

His defense held up well anytime the ball was hit his way to third base. In his highly anticipated Mets debut, Baty finished 1-for-4 with a home run and 2 RBIs. The talented young hitter should continue to propel the Mets lineup moving forward.

The night got started for the Mets right away. On back-to-back pitches in the first inning, Starling Marte and Francisco Lindor hit solo home runs. Marte hit his second homer of the game when he led off in the seventh inning on the first pitch. Marte finished last night going 3-for-5. He now has a .291 batting average, 14 home runs, and 53 runs batted in on the year.

Lindor went 2-for-5 for the Mets in game three of this four-game series. He scored two runs as well. Lindor now has a .271 average, 21 homers, and 83 RBIs (tied for fifth in baseball).

Jeff McNeil continues to excel for the Mets batting order. Last night, he went 3-for-5 with a run scored. McNeil now has seven hits over the last three games. His batting average is now up to .316, which places him fourth in all of baseball.

The final four hitters to give the Mets contributions last night were Pete Alonso, Mark Canha, Brandon Nimmo, and Daniel Vogelbach. Canha had two hits, a walk, an RBI, and a run scored.

Nimmo, Alonso, and Vogelbach all gave timely ninth-inning hits. It started with Nimmo’s single. With him and Lindor on second and third with one out, Alonso provided a big two-run single. Alonso is now up to 99 RBIs for the year. Lastly, Vogelbach hit one well to right field, driving in Alonso. This big ninth inning gave the Mets all the run support they needed, extending the lead to 9-5.

Max Scherzer went 6.1 innings last night, throwing 91 pitches. He threw eight strikeouts and allowed just three hits. He did, however walk three batters and give up four earned runs. Scherzer exited in the seventh with a jam left on the bases.

Aside from Edwin Diaz, Adam Ottavino, and Trevor May each had their struggles. Ottavino got his two needed outs but allowed a homer and a walk. May pitched the ninth and threw 27 pitches. He allowed three hits and two earned runs. The Braves hit many hard balls on May and cut the game to 9-7. In the end, he was able to hold on.

Diaz was brought in for the eighth to face the meat of the Braves order. Diaz was his usual self. He threw just 10 pitches and got two strikeouts.