Alonso Powers Mets To A 9-4 Victory Over Marlins 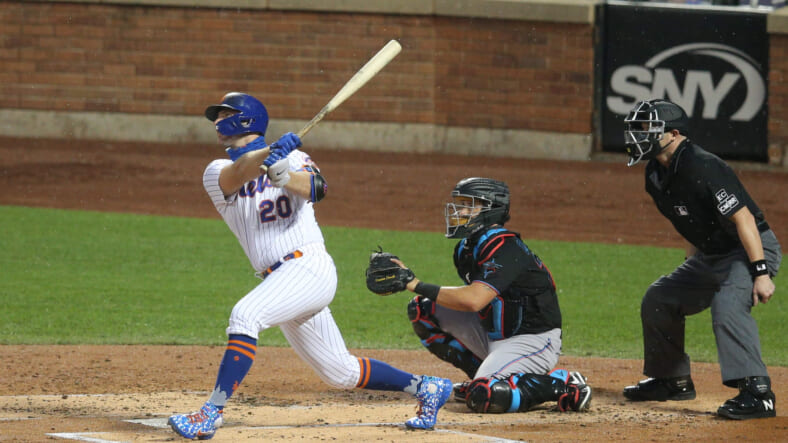 Every game for the New York Mets is a must-win at this point in the season, and their offense is starting to find its way at the right time. A two-homer game from Pete Alonso began and ended the Mets’ offensive output in their 9-4 win over the Miami Marlins.

Pete unloaded on this one. ? pic.twitter.com/qCi1JJNPGL

Alonso’s first home run gave the Mets an early 2-0 lead, and it was the 100th of his career. His chase to 100 is the second-fastest of all-time behind the mercurial Ryan Howard. The rest of the team found creative ways to get their third and fourth runs as two hit-by-pitches allowed them to tack runs against Eduardo Cabrera. At one point, the Mets had four runs but just one hit in the entire game. Francisco Lindor added more with a two-run single and J.D. Davis had a pinch-hit RBI double.

The Mets pulled off the rare feat of scoring nine runs but needing six runs to get them. It was a weird night for both teams, who each committed three errors and combined to go 3-for-22 with runners in scoring position. Carlos Carrasco once again allowed a first-inning run but managed to battle through the errors behind him. Carrasco pitched five innings, allowing four runs (one earned), and did enough to give the Mets a chance to win. The Mets bullpen picked up the rest with four shutout innings to nurse the game to its conclusion.

The Mets did not gain any ground on the first-place Atlanta Braves, who defeated the Washington Nationals. They did gain on the second-place Philadelphia Phillies and have an opportunity to gain on the San Diego Padres for the second wild-card spot. On Wednesday, Rich Hill will take the mound against Marlins ace Sandy Alcantara. The first pitch is another early 6:40 p.m. ET start from LoanDepot Park.