WATCH: Knicks’ Julius Randle has ‘most impressive weekend of workouts Iâ€™ve had all off-season’ 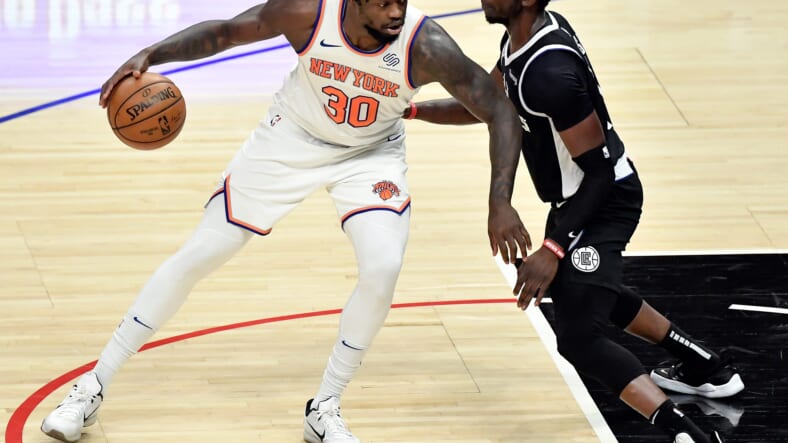 The off-season for New York Knicks All-Star power forward Julius Randle is just an extension of the regular season. Working out diligently to improve his weaknesses and further strengthen his primary qualities is just part of Randle’s new regimen after his best season to date in 2021.

Randle was the reason the Knicks made the postseason and secured the 4th seed in the Eastern Conference, playing in 71 games and averaging over 37 minutes per contest. The 26-year-old posted career-highs in points, rebounds, and assists last season but is looking to improve even further after signing a fresh four-year extension with the Knicks.

The front office and Randle connected on a four-year, $117 million deal, opening up a max contract down the road for another star player, keeping his cap-hit under $30 million per season. However, despite taking a more team-friendly deal, Randle continues to work in the lab, showcasing his crisp fundamentals and work ethic.

Randle spent the weekend working with Chris Joseph Brickley, an NBA skills trainer who stated the session was “one of the most impressive weekend of workouts Iâ€™ve had all off-season.”

One of the most impressive weekend of workouts I’ve had all off-season. The most quick/explosive, in-shape, sharp I’ve ever seen @J30_RANDLE ?? At times, guys come off of a ‘Most Improved Player’ & ‘All Star season’ & lose some focus. Julius is extremely locked in!! pic.twitter.com/dE4gbk4R6C

Randle looks visibly thinner and leaner, which may suggest a faster and lighter approach to his game this upcoming season. Randle dominated with a more physical and imposing frame, but leaning out a bit could contribute to quicker pull-up jumpers and speed from the perimeter to the basket. It could also suggest they want Randle to feature specifically in his preferred power forward role rather than a small center, which Obi Toppin could find himself gravitating toward.

However, his shooting efficiency and form are what pop out the most from the workout video. If he can build upon his stellar 2021-22 campaign and pair his scoring talents with the acquisitions of Kemba Walker and Evan Fournier, the Knicks could find themselves with one of the best offenses in basketball, barring injury.