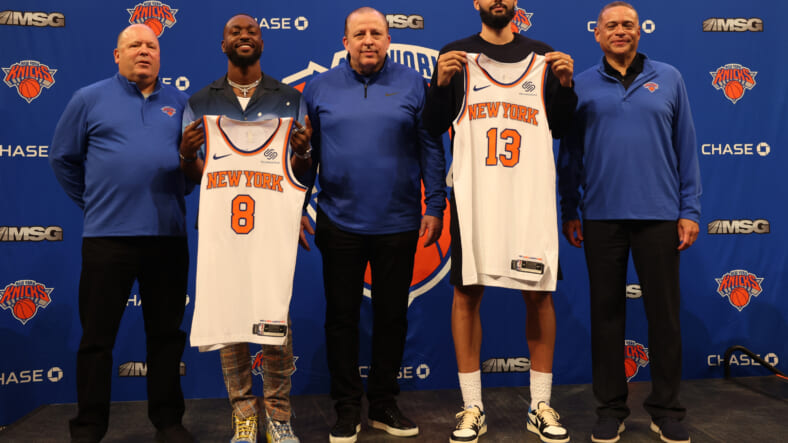 To some, it’s just the preseason games. But donâ€™t tell that to the New York Knicks fans who will troop to the Garden and cheer out for their team after spending most of last season cheering from their couch.

The preseason games are not lacking in drama as there areÂ many storylines to be unpacked when the retooled Knicks plunge back into action after a surprising playoff run and a solid offseason.

The Knicks will play four preseason games, three at the Garden in what is expected to be a full capacity crowd in one of the most anticipated seasons in franchise history in a long while.

Letâ€™s take a look at the five most intriguing storylines of the Knicksâ€™ preseason.

Kemba Walker and Evan Fournier will have their Garden debut as a Knick in their preseason opener.

Walker and Fournier arrived with much fanfare and are viewed as upgrades over former starters Elfrid Payton and Reggie Bullock.

It will be interesting to see how Tom Thibodeau will manage Walker, Derrick Rose, and Immanuel Quickleyâ€™s minutes.

The One That Got Away

The Knicks reportedly tried to trade up for Oregon star Chris Duarte in the draft. And the Knicks will have the chance to size up the one prospect that got away right in their preseason opener.

Actually, it will be Duarteâ€™s second game against the Knicks, but it will be his first against their entire lineup. Duarte made quite an impression in his Summer League debut in Indiana Pacersâ€™ loss to the Knicks. The 24-year old lived up to his billing as a ready-made 3-and-D player with his solid play on both ends of the court as he came away with a full line:Â 14 points, 3 assists, 2 rebounds, 2 steals, and 2 blocks.

The Knicks will play two games against the new-look Wizards, who scooped up Spencer Dinwiddie and picked up Kyle Kuzma, Kentavious Caldwell-Pope, and Montrezl Harrell from the Los Angeles Lakers for Russell Westbrook.

Dinwiddie, who essentially replaces Westbrook, had a love and hate relationship with the Knicks fans and media following his exit from crosstown rival Brooklyn Nets.

A segment of the fan base wanted him to be a Knick before Walker came along. New York Post stirred the pot with a report that he wanted no part of it.

Dinwiddie quickly shut down the report as he moves on from the drama in New York for the much laidback atmosphere in the nationâ€™s capital.

Why y’all still writing this stuff about me? I never said that.

I’m just happy to be on the @WashWizards https://t.co/vurOQYIC5m

Dinwiddie is happy and content that he got his bag in Washington as Bradley Bealâ€™s new backcourt partner. But there will be no love lost for sure when he plays his first game at the Garden following his Nets stint.

MotorCade at the Garden

The top overall pick Cade Cunningham will make his Garden debut when the Detroit Pistons visit New York on Oct. 13.

Cunningham hit seven triples in what came down as his coming out party in the NBA Summer League in Las Vegas.

Thibodeau will definitely map out a defensive game plan against the gifted rookie.

Last chance to catch the bus

The preseason games will be Luca Vildozaâ€™s final test before the Knicks decide on his team’s option for the upcoming season. The team has until the opening night whether to keep the Argentine guard or let him go.

After a month of training with the Knicks player development staff, Vildoza had an underwhelming performance in Argentinaâ€™s Olympic quest. He went scoreless in the Summer League before he was shut down due to a foot injury.

Veteran guard Dwayne Bacon, who signed an Exhibit 10 deal, is lurking in the background and remains to be the biggest threat to Vildoza.