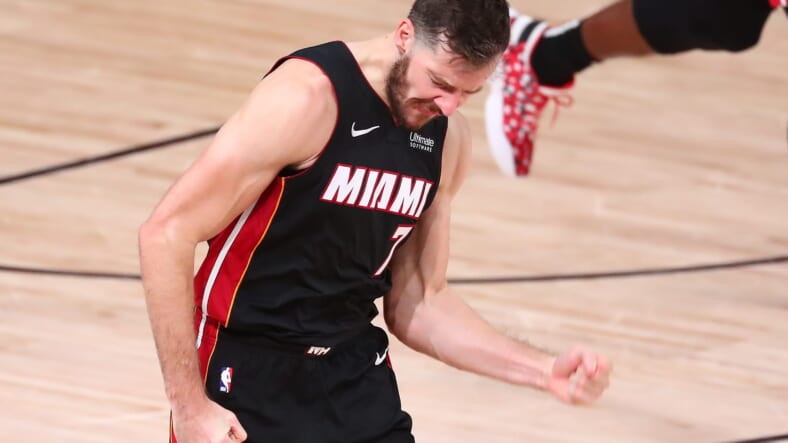 In 2015, Goran Dragic had the New York Knicks as one of his preferred destinations along with the Miami Heat and the Los Angeles Lakers.

Pat Riley beat Phil Jackson in the trade deadline acquiring the Slovenian point guard and his brother Zoran from the Phoenix Suns. Dragic went on to stay long term with the Heat and was rewarded with a Finals trip this season.

Five years later, Dragic could find himself crossing paths with the Knicks again as multiple sources believe that the Heat point guard is among their free-agent targets.

The Knicks have also been linked to trade rumors involving Oklahoma City Thunder’s Chris Paul and another free-agent-to-be Fred Van Vleet of the Toronto Raptors. But the price of acquiring either of those two backcourt generals could be too high for the Knicks who want to maintain their cap flexibility for the next summer’s loaded free agency class.

One NBA agent views Dragic as a cheaper alternative that would make more a lot of sense from a financial standpoint and as a culture-builder.

“He’s one year younger than Chris (Paul) and has more years of experience than Fred (Van Vleet). He could be the ideal leader of this Knicks rebuild just like what he did with the Heat and be a mentor to their young guards at a relatively cheaper contract,” the agent told Empire Sports Media.

Another source said that the Knicks will have the cap space to lure Dragic with more money on a long-term deal, but the Heat will be motivated to keep Dragic after their successful run this season.

“I believe the Heat will try to keep him and run it back next season but it’s going to be tough for them to offer a long-term deal as Pat Riley has his eyes on the 2021 free agency,” the source told Empire Sports Media.

Grammy-nominated guitarist Robert Randolph, who is one of the Knicks’ owner James Dolan’s close friends in the music industry, has tweeted that Dragic is the Knicks’ top target in the free agency.

Dragic has accepted an off-the-bench role in the regular season and served as one of the catalysts in the development of the Heat’s young players such as Kendrick Nunn, Duncan Robinson, and Tyler Herro.Â  The veteran guard averaged 16.2 points and 5.1 assists for the Heat while shooting 37 percent from deep this season.

A consummate pro, Dragic is viewed around the league as the embodiment of the Heat culture in the post-LeBron James and Dwyane Wade era.

“I think his range is 2 years $10M per with another team. 1 year at $16-18 with Miami. It’s hard to see him getting 3 years at his age. Itâ€™s also very hard seeing him going to a rebuild like in New York,” Marks told Empire Sports Media.

[wpdiscuz-feedback id=”w4tkmono1o” question=”Would you rather have Goran Dragic than Chris Paul or Fred Van Vleet in New York?” opened=”0″]A three-year deal in the range of $30 to $35 million or a 2 plus 1 deal similar to Julius Randle’s contract structure could lure Dragic to ride the sunset in New York.[/wpdiscuz-feedback]

The Heat, on the other hand, could use their Bird rights to retain Dragic and offer a one-year bloated contract to maintain their 2021 cap space. But Dragic was non-committal last March, according to a Miami Herald report, although he maintained that he was happy at Miami.

“We’ll see,” Dragic said about signing the one-year deal. “A lot of different factors, my family, myself. I would say it’s too soon to talk about it. I’m not thinking about my next contract. I’ve always been a guy in the present.”

A lot of things have changed since then, with Dragic carving out a bigger role as the Heat went deeper in the playoffs. But it has also caused too much stress on his foot that kept him out of the NBA Finals since Game One — a factor that may keep Dragic from accepting a one-year deal.

Dragic, 34, may have played his final game with the Heat this season after tearing his plantar fascia on his left foot in the Finals opener.

According to a medical expert, Dragic could be sidelined by at least six weeks up to more than nine weeks.

“To better understand Goranâ€™s foot injury, a brief run-through of the anatomy & function of the Plantar Fascia and its importance in a player like Goran is appropriate. The plantar fascia refers to the long thick fibrous tissue at the bottom of the foot that runs from the heel to the toes,” Dr. Ernest Eusebio, a New York City-based Performance Physical Therapist & High-Performance Consultant, told Empire Sports Media.

“It functions to absorb high tension forces, maintains the structure of the foot when weight bearing, and creates a strong, stable platform upon which propulsion occurs.”

The Filipino-American doctor continued that “a guard like Dragic who relies on powerful push-offs, cuts, and changes of pace — a tear to the plantar fascia is a devastating structural injury that dramatically changes the function of his foot, and ultimately his chances of seeing the court again this series.”

Dr. Eusebio, whose experience includes affiliations with major sporting brands & companies, athlete & personnel affiliations in the NBA, NFL, MLB, domestic, and international Olympic Sport, as well as figures in Entertainment & Media, has also noted that the injury was caused by the accumulation of stress on the foot.

“The injury itself doesnâ€™t happen overnight — itâ€™s a repetitive stress injury, where consistent overload to the tissue leads to degenerative changes of the fascia itself. Goran, at 34, with 12 years of NBA experience, has likely had his fair share of load to his plantar fascia,” Dr. Eusebio said.

“Combined with the intensity of this yearâ€™s NBA Playoff Basketball and the amount of minutes required from him to help the Heat reach the Finals (33.4 mins avg per playoff game, via basketball-reference.com), itâ€™s the highest amount of game-specific load heâ€™s had to tolerate since his 2015-16 season.”

It’s the same injury that kept Malcolm Brogdon out for a significant time during the Bucks’ playoff run last year before he was traded to the Indiana Pacers. Brogdon has since bounced back with a career year.

Dr. Eusebio, who is also an awarded clinician (American Health Council â€œBest in Patient Careâ€), is the founder of the Wolves Performance & Lifestyle Collective, an all-encompassing high-performance consultancy providing solutions in Professional Sport, Entertainment, & Fortune 500. He explained that treating Dragic’s injury will involve receiving physical therapy & medical management that includes specialized stretching, strengthening, soft tissue, and joint mobilization, and interventions like PRP (Platelet Rich Plasma) injections to help facilitate and optimize tissue healing and recovery windows. He also added that custom foot orthoses are usually instituted immediately as tolerated as well to assist with structural support, and then the athlete can return to sport-specific strengthening.

“The estimated total timeline for an elite athlete to return to play is about 9.1 weeks +/- 6 weeks pending the severity of the injury, the success of the rehabilitation, and player preparedness,” Dr. Eusebio concluded.

By Dr. Eusebio’s estimation, Dragic should be ready for next season, which could begin as early as January next year. But whether Dragic will still be in Miami or New York or anywhere else, we will find out when the free agency frenzy begins in the first week of December.