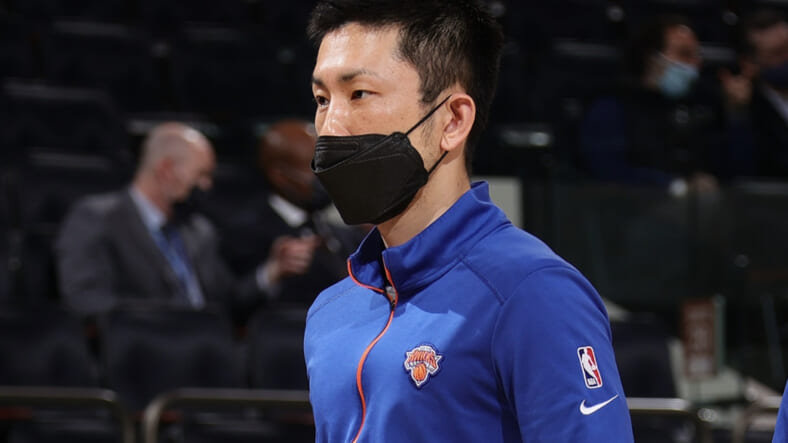 It’s not only Immanuel Quickley and Obi Toppin who are taking leadership lessons this summer for the New York Knicks.

Daisuke “Dice” Yoshimoto, the long-time Tom Thibodeau’s right-hand man, is also taking the crash course in his first big break as a coach.

So far, the boyish-looking, 40-year old assistant coach is making the most out of the opportunity.

After the Knicks groped for form in their opening-day loss to the Toronto Raptors, the team has responded to Yoshimoto’s coaching and won the next two games.

“First of all, I want to thank Leon (Rose), Wes (William Wesley), Scott Perry, and coach Thibs (Tom Thibodeau) for giving me this opportunity to coach this team,” Yoshimoto said after the Knicks’ opening game in the NBA Summer League.

“It’s all about me getting better as well, to keep improving. It’s also a great opportunity for me to showcase what I’ve learned from coach Thibs. I’m biased. I think coach Thibs is the best coach in the league so, I’m very fortunate to be able to learn from him over the course of the years.”

Yoshimoto is just one of the few Asian-Americans coaching in the NBA. Miami Heat head coach Erik Spoelstra remains to be the poster boy as the lone Asian-American head coach. Other assistant coaches around the league with Asian heritage are Portland Trail Blazers’ Jonathan Yim, Los Angeles Clippers/Agua Calientes’ Natalie Nakase. Filipino-American Jimmy Alapag, who led the Philippines to the FIBA World Cup in 2015, is trying to join that exclusive club. Alapag is in his second stint as an assistant coach for the Sacramento Kings’ Summer League team.

Like Spoelstra, Yoshimoto climbed the ranks from the film room to an assistant coach. In Knicksâ€™ first summer league under Thibodeau, they rolled the dice with Yoshimoto.

“I think [diversity] is important. At the same time, I’m focused on getting better. I just want to be the best coach that I can be,â€ Yoshimoto said.

â€œI’m just fortunate to be able to learn from guys like coach Thibs over the years. I learn from everybody. I started with coach Mike Fratello and Lawrence Frank and coach Thibs for a long time. Also, coach Mike Malone, I had a chance to work for him before in Denver. Two years ago, I had the chance to work in college for coach Tom Crean. Obviously, this is a great opportunity for me to get better.â€

Yoshimoto broke into the NBA as an intern for the New Jersey Nets in 2009 after getting his Master’s degree in Education from Fordham in 2008. Before that, he played Division III basketball and received a bachelor’s degree in Sports, Event, and Entertainment Management from Johnson and Wales University.

As an intern with the Nets, Yoshimoto assisted with player development and coded opponents’ games.

When the Bulls fired Thibodeau, Yoshimoto transferred to the Denver Nuggets, holding the same position as the head video coordinator. He linked up again with Thibodeau anew in Minnesota and now with the Knicks. In between his Timberwolves and Knicks stints, he worked with Georgia Bulldogs as their director of basketball strategy and video.

Throughout his NBA journey, he learned how to live code games, scout opponents to help create game plans, edit videos for the coaching staff and players, prepare and present games plans, and work with players daily in film reviews and workouts.

As much as Yoshimoto has empowered Quickley and Toppin to lead the Knicks’ Summer League squad, Thibodeau also did the same to him.

After the Knicks lost to the Raptors, he talked with Thibodeau and looked at the film. He came back strong, guiding the Knicks to win the next two games against Indiana Pacers and the Los Angeles Lakers.

“We talk about games and stuff. He always tells me things that we, collectively, need to work on so that’s why my focus is to try to get this team better. My job is to tell him what I see. I think the team has done a great job responding to that,” Yoshimoto said.

Thibodeau values loyalty. He demands it as much as he gives it to anyone who deserves it. Yoshimoto has earned Thibodeau’s trust, and as much as this NBA Summer League coaching job is one of those rewards, it is also the coach’s way of building the team’s culture.

Thibodeau often harped building a team of leaders. He made one out of Julius Randle last season. Derrick Rose and Taj Gibson became leaders in Chicago that Thibodeau now leans on in New York. He wants to do the same with Quickley and Toppin through Yoshimoto. And in the process, developing Yoshimoto, too.

This is the Thibs’ way — a culture of leadership and accountability.

You can sense the humility, often perceived as shyness when the soft-spoken Yoshimoto speaks during the Summer League postgame interviews. As Yoshimotoâ€™s Japanese features are more pronounced, Thibodeau is empowering him to embrace his heritage and break the Asian stereotypes.

“He just tells me to be me, and I’ve got to be comfortable with my own skin. And I’ve got to find my voice, and that’s what I’m doing right now,” Yoshimoto said.

So far, he’s pushing the right buttons and making the proper adjustments. The young Knicks team has responded well to him. He commanded their respect that resulted in their fine play this summer.

Of course, Yoshimoto wanted to win and make a splash in his first coaching break. But the heart and core of these Summer League games aren’t lost on him.

“Obviously, it’s important to have [progress] in terms of the development of players and being able to win some games. There’s a fine line in between, and we have to find that balance where we can do both. We need to keep building the culture,” Yoshimoto said.

Quickley, Toppin, and some of the Knicks rookie standouts like Miles McBride and Jericho Sims are all basking in the afterglow of their solid NBA Summer League campaign. Yoshimoto is content to be in the background.

“I just focus on what I have to do. I just concentrate on getting this team to play at the highest level they could,” he said.