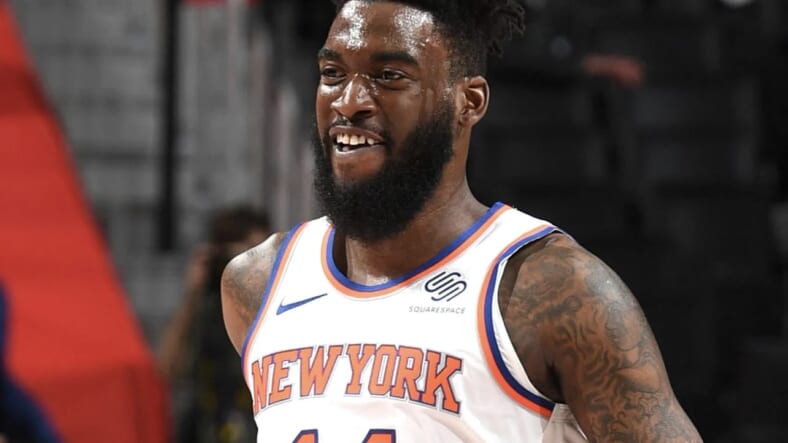 The New York Knicks are signing Norvel Pelle to a multi-year deal after his second 10-day contract expired Wednesday, according to Shams Charania of The Athletic.

Pelle is averaging 1.8 points, 1.8 rebounds, and 0.8 blocks in just 6.5 minutes as the third-string center for the Knicks. Heâ€™s appeared in four games, including the Knicksâ€™ 137-127 overtime win against the Atlanta Hawks last night. The 6-foot-10 Pelle had two points and one rebound in nine minutes after Taj Gibson and Nerlens Noel went down with injuries.

Noel, who took an elbow to the mouth, returned in the fourth quarter and finished the game.

Gibson, however, was ruled out after suffering a laceration on his eyelid. If Gibson misses time, Pelle will play backup to Noel.

The Knicks grabbed Pelle three weeks ago as insurance after losing starting center Mitchell Robinson to a broken foot.

Pelle quickly earned a fan in coach Tom Thibodeau who was effusive in his praise.

â€œNorvel was terrific,â€ Thibodeau said last week after Pelle collected four points, three rebounds, a steal, and a huge block on Zion Williamson in their 116-106 win in New Orleans. â€œHeâ€™s been putting in a lot of extra work. Heâ€™s still finding his way, learning the system. But his length, shot-blocking, the rim protection, is huge for us.â€

Pelle was an instant fan-favorite the moment he took the floor for the Knicks.

During his debut against the Detroit Pistons earlier this month, he jammed his finger while attempting a dunk. But Pelle showed his toughness as he insisted on playing. After taping his jammed finger, he went on to block Pistons rookie Isaiah Stewart twice in a row.

â€œSeeing a player like that, that just joined us to go down with an injury and be able to wrap it right back up and make big blocks showed his energy,â€™â€™ Reggie Bullock said after the game. â€œHeâ€™s a Knick-type-of-player with the grit to continue to play in the game. We love that fight from him.â€™â€™

Undrafted in 2013, the 28-year old Antiguan-Lebanese center played overseas and earned his spur in the G League. He had brief stops with the Philadelphia 76ers last season, Brooklyn Nets, and Sacramento Kings this season before finding a home in New York.

This move can be viewed as long-term insurance for the Knicks, with Noel and Gibson set to become free agents after this season.