New York Knicks: Who will be the starting guard during the 2019-20 season? 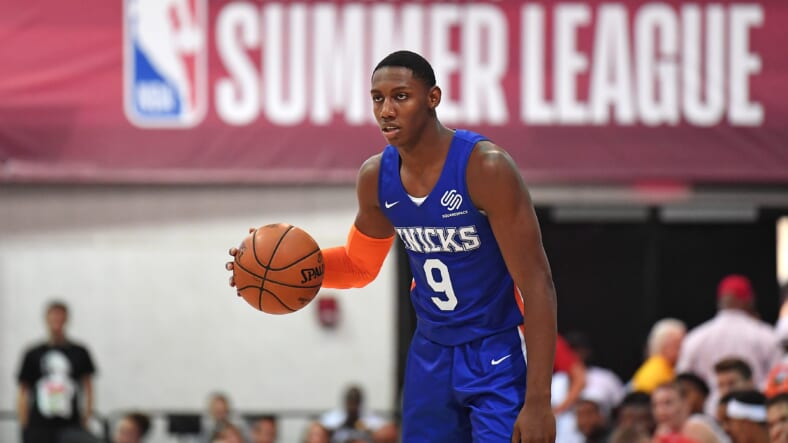 Here are three New York Knicks players we know will likely be in the starting lineup:

The point guard should be Dennis Smith Jr., and it is his job to lose. At power forward, Julius Randle and the new Knicks center and blocking sensation Mitchell Robinson.

After that trio, the shooting guard and small forward positions are up for grabs.

Damyean Dotson was a strong candidate to begin the season as the starting shooting guard. However, due to his right shoulder not fully healed, Dotson might not be ready for the start of the season. That leaves it wide open for other players.

Next up would be, Allonzo Trier, Frank Ntilikina or RJ Barrett.Â  It is going to come down to who performs better during camp and the preseason. The same goes for the small forward position.

However, since trading away Tim Hardaway Jr. in the Kristaps Porzingis trade, the Knicks are without a go-to scorer.Â  Hardaway Jr. was not the best go-to option, but it was feasible for the time.

Ntilikina is coming off a strong performance in the FIBA World Cup for France. His offensive production improved, but you would not know that from just looking at his stats. Ntilikina averaged 19.5 minutes, shot 43.6% from the field while averaging 8 points per game. His numbers do not reflect the aggressiveness and confident outlook he gained through the World Cup.

Ntilikina could a reliable option to start at shooting guard since he brings an excellent defensive approach to the starting lineup.

Then, there is the 3rd overall pick Barrett. The skills and potential are there, but not at an NBA level yet.Â  It will take time for him to develop a more consistent shot.Â  His confidence grew as the Vegas summer league rolled on, so fans know he is just scratching the surface.

Some fans would want to see Barrett start immediately since he was the 3rd pick.Â  Also, he appears to be more mature then people think and if he wants to learn the hard way then what better way to toss him into the fire in the NBA.

Our picks for shooting guard who be to first start with Ntilikina.Â  Show him that you have the confidence in him, stemming from the World Cup to be a starter in the league.Â  He needs trust in his coach and player to succeed.Â  If that does not work, juggle Barrett and Trier until you find the right fit.

Coach David Fizdale will be experimenting with the lineup a lot at the beginning of the year.Â  Smith Jr., Randle, and Robinson appear to be the only three that will be the consistent starters.Â  It will be a battle for remaining shooting guard and small forward positions.Â  Fizdale will juggle with those two positions to find out what works best with the other three starting locks.