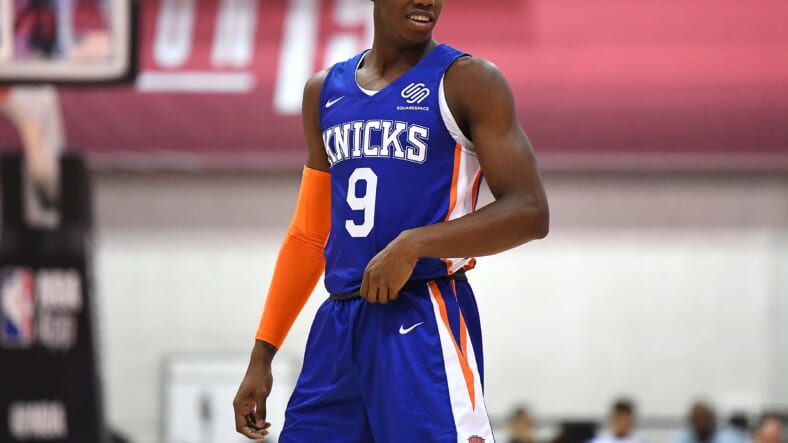 “That stuff, I think a lot of that is tied to team success and thatâ€™s what everyone has to understand,” Thibodeau said on Barrett’s omission in the All-Rookie Team.

The Duke product put up solid numbers across the board but still wasn’t enough.

He ranked third in scoring (14.3 points), fourth in rebounding (five rebounds), and fourth in steals (one steal) among all rookies and also dished out 2.6 assists per game. However, some voters saw his low shooting percentages, which could be attributed to his high-usage rate in a roster that was not tailored to his style of play.

Barrett shot only 40.2 percent from the field, including 32 percent from deep.Â  He was ranked among the least-efficient shooters in the league. What’s worse is that he was an abysmal 61.4 percent from the stripes and had one of the worst effective field goal percentages among rookies at 44.5 percent.

The Knicks ended up in the lottery again after posting a 21-45 record in the pandemic-shortened regular season. And that also weighed heavily against Barrett in the voters’ minds.

“The better the team does, the more recognition the players will get.Â  And so thatâ€™s the past and I want to look forward,” Thibodeau said.

With the new leadership investing heavily in player development, the prevailing hope is that Barrett and the Knicks will be better next season.Â  And slowly, things are starting to look rosier in New York.

“Today, he had a terrific practice. Today was his best practice,” Thibodeau revealed. “Heâ€™s rebounded the ball extremely well, he did playmaking today. He did a great job with that.”

Thibodeau is hopeful Barrett can build on that.

“And so I just want him to concentrate on improvement.Â  As a young player, just getting the work part down, I think thatâ€™s the first step, the conditioning piece, to continue to work on shooting. Thereâ€™s a lot of things he can do well,” he said.

The Knicks wrap up their team workouts Wednesday, but the remaining players in their Bubble setup can still do individual workouts until Oct. 6.Â  Thibodeau is pleased with the progress he’s seen. The past month has more hits than misses for the Knicks.

“It was critical to get to know the players, and for them to get to know us,” Thibodeau said. “I think that was invaluable. I think weâ€™ve had a very good six weeks and we intend to build on that.”

With the NBA Draft and the next season getting pushed back, Thibodeau and the Knicks will be afforded more time to get to know each other and have a longer preparation. But they will have to be creative under the restrictions.

“Weâ€™re waiting on what weâ€™re able to do with the guys that are out of our market. Â If not, weâ€™ll find other ways whether through film, communication with the players. But we plan to spend more time with our players this offseason,” Thibodeau said.

One of their foundational pieces, Mitchell Robinson, is out of the market.Â  After attending the individual workouts, he went back home to Louisiana to take care of some personal matters.Â  There’s no definite date yet when he’ll be back with the team.