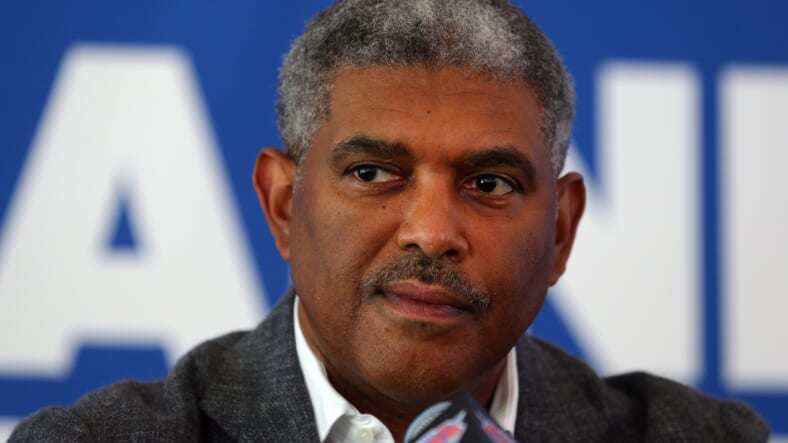 New York Knicks aren’t going to be trading away their ‘assets’ for picks this trade deadline.Â  It appears like President Steve Mills still has his eye set on going for the 8th seed in the Eastern Conference.

While it is always good to have optimistic goals for the Knicks, we have to be realistic.Â  The Knicks don’t have a shot at the playoffs.Â  They have the second worst record in the conference, 10-28, and are 7 games out of the 8th seed.Â  Don’t see these “dogs” making noise.

Some teams that have been trying to compete for a playoff spot have been eyeing a few New York Knicks players such as, Marcus Morris and Dennis Smith Jr.Â  Other players that could be on the market are Bobby Portis, Wayne Ellington and Allonzo Trier.

Reports from SNY’sÂ  Ian Begley were that the Knicks would rather get players as compared to picks.Â  That is if they were to make trade which it seems like Mills is avoiding.Â  That may be the one good thing Mills has said this season.Â  If the Knicks want to compete sometime this decade, they’re going to need young talent with upside.

Getting picks is good but unless it’s a high pick you’re taking a chance and might get lucky.Â  The Knicks aren’t lucky, if anything they’re cursed.Â  They aren’t the best at evaluating talent either.Â  They got lucky getting RJ Barrett.Â  However, the did hit a home run with Mitchell Robinson.Â  So if they should make trades, getting back young assets would be considered a win.

Mills has been on the hot seat for years now.Â  He is more to blame for the last two rosters than Scott Perry, who’s entering in his second year with the team.Â  But Mill’s relationship with the Knicks owner, it seems changes in the front office are unlikely.Â  How many embarrassing seasons are the Knicks going to have before their needs to be a major shake-up in the front office?