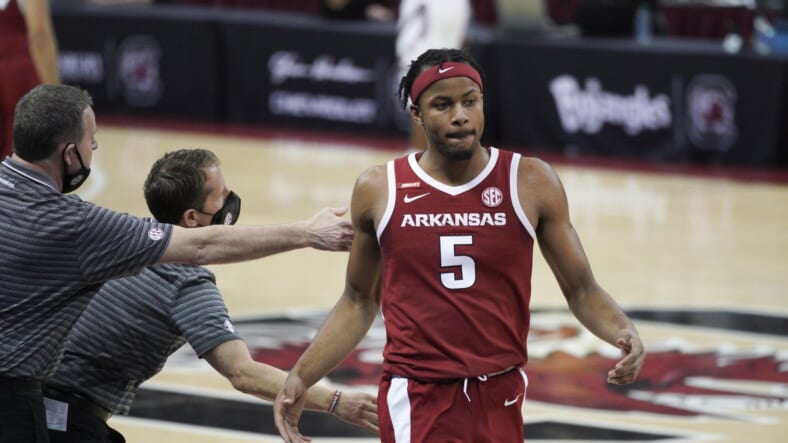 FILE - Arkansas guard Moses Moody (5) is congratulated as he walks to the bench during the second half of an NCAA college basketball game against South Carolina in Columbia, S.C., in this Tuesday, March 2, 2021, file photo. Moody is The Associated Press Newcomer of the Year in the Southeastern Conference and a member of the All-SEC first team, in voting announced Tuesday, March 9, 2021. (AP Photo/Sean Rayford, File)

Everything Moses Moody did in the last few years was to get closer to his NBA dream.

Now that heâ€™s on the NBA doorstep, he feels confident with the preparation he did to meet the challenge.

â€œIâ€™ve been playing basketball for as long as I remember. NBA has always been a goal my whole life. Thatâ€™s been the why to a lot of things I did â€” the workouts, waking up early, even just doing the right thing,â€ Moody said during his NBA Draft media availability Friday.

In 2019, he joined what many viewed as the most talented high school team at Montverde.

He played alongside Cade Cunningham, the projected top overall pick of this class, Scottie Barnes, and Dayâ€™Ron Sharpe.

â€œThat team was great. It was a lot of fun. Those are my guys. We got good relationships. This was always a dream, a goal for all of us,â€ Moody said.

â€œWith the network I have and the group of friends, weâ€™re just pushing each other to be great.â€

After learning to play off the ball in a star-studded Montverde team, he joined Arkansas and became the Razorbacksâ€™ go-to guy in a memorable Elite Eight run in the NCAA tournament.

Moody led Arkansas in scoring and finished third in the SEC with 16.8 points per game on a 43/36/81 shooting split. More importantly, he led the Razorbacks inÂ plus-minus at +309. Clearly, Moody impacted winning asÂ one of the only three NCAA freshmen who averaged over 15.0 points and 5.0 rebounds.

4 NCAA prospects below the age of 21 met this criteria:

Moody was the clear-cut best player on a college team stacked with veterans that essentially played an NBA system.

Arkansas head coach Eric Musselman has NBA pedigree. Musselman learned the ropes from his father Bill then heÂ grew into his own man coaching the Golden State Warriors and the Sacramento Kings.

Musselmanâ€™s staff have held various NBA jobs. Keith Smart, a former NBA player, was an assistant coach with the Knicks under David Fizdale before he joined Musselman at Arkansas. Clay Moser was an advanced scout in the NBA and a former D-League head coach.

“I do feel like that gave me a little bit of headstart playing in that system with a lot of pro coaches. Everybody has really been advanced when it comes to that aspect,â€ Moody said.

At Arkansas, Moody learned NBA terminologies. He conducted himself like a pro immersing in analytics coaching, advanced stats and film breakdowns much like he would encounter in the next level.

Last year was an introduction to the NBA. Now, he is ready to take the actual test. But on which team? Thatâ€™s still being debated and will be known on Thursday.

“If they draft Moses Moody, I feel like they’re getting a versatile player that can play on both sides of the ball and help, in many ways as possible, to win games,â€ Moody said. â€œThere are no point blanks, there are no periods to what I can do. I feel like I can do whatever my coach wanted me to do. I’m fluid and I can adapt to any situation.â€

When he was young, Moody was always the lanky tall kid who dreamed of being Kevin Durant. Now with a size (6â€™4.5 without shoes) shorter than Durant, he has learned to adapt.

He said he picks up different things from different players like his midrange game from Bradley Beal, CJ McCollum.

And his name is Moses Moody… BUY STOCK!!!

(Minimum 15 possession for each)

But what will separate him from Beal and McCollum is if he realizes his potential to become a better two-way player than them in the next level.

Moodyâ€™s wingspan of 7â€™0.75, tops among guards in this draft, gives him a headstart in that category.

â€œI just like to learn and acquire knowledge,â€ Moody said.

If Moody got a headstart to NBA introduction, one NBA team also enjoyed a headstart when it comes to intel on the Razorbacksâ€™ star wingman.

Musselmanâ€™s early years in NBA coaching under his father coincided with Tom Thibodeauâ€™s. Musselman and Thibodeau forged a friendship that could come to the fore as the Knicks are looking for wings and shooting in this draft.

Moody, Musselmanâ€™s best player at Arkansas last year, perfectly fits that role. But itâ€™s unsure if Moody will still be there when the Knicks select at 19th and 21st in the first round.

Maybe, Moody is a target as the Knicks are reportedly looking to trade up or it could be a smokescreen.

Arkansas’ Moses Moody said he met with the Knicks in Chicago but haven’t been to New York for a workout. pic.twitter.com/5kfbGrVmur

Moody said he hasnâ€™t been invited to a workout yet in New York though he met Thibodeau and the Knicksâ€™ front office at the Draft Combine in Chicago.

â€œWe had a really good meeting. I got to know a lot of guys in the front office as well as coach [Thibodeau]. It was a really great interaction, and I got a good feel for their system and their plan for the team,” Moses said.

The Knicksâ€™ surprising playoff run last season was anchored by Julius Randleâ€™s growth to an All-NBA player and RJ Barrettâ€™s leap as a sophomore.

Moody could see himself playing in between them as their two-guard with Barrett sliding to small forward.

“They really had a good team as you guys saw this year,â€ Moody said. â€œShooting is one thing — a translatable skill that I can bring anywhere I go. And other than that, I can play off the ball, with the ball in my hand, create for others and I will just add offensive help to the team as well on the defensive end.”

Everything Moody did up to this point is to realize his NBA dream.

From winning a state championship in Little Arkansas to going on a 25-0 run at Montverde with future NBA elite talents and finally, getting NBA coaching from Arkansas, Moody went through a lot of different environments to grow himself into one of the most complete prospects heading into Thursdayâ€™s NBA Draft.

â€œYouâ€™ve got to be different to make it to the NBA. If you want different results, you have to do something different along the way,â€ Moody said.

On Thursday, Moody will certainly get the result he wanted. His winding path to the NBA reaches its end. Itâ€™s time to begin another path towards a Hall of Fame career. And he plans to do it exactly how he reached this far.