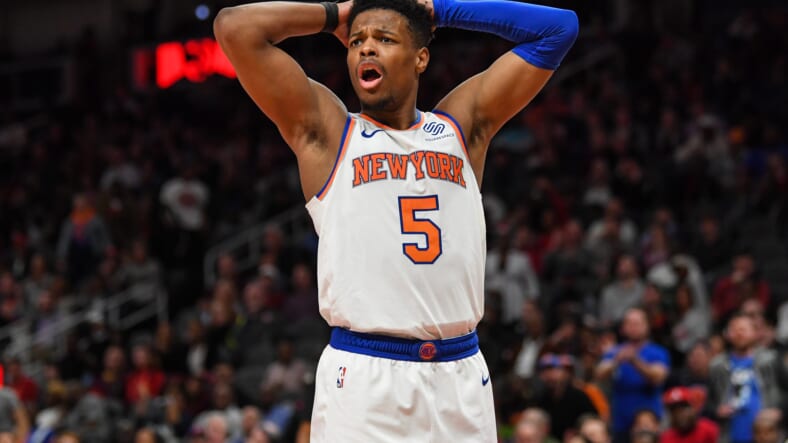 The back-court for the New York Knicks always seems to be crowded.Â  And now, it’s about to get more congested with the return of Dennis Smith Jr. and Daymean Dotson.

Smith Jr. has been nursing a lower back injury and Dotson is coming off shoulder surgery this off-season.Â  The two should make their preseason debut this Wednesday against the Atlanta Hawks.

Just as the Knicks welcome back Smith Jr. and Dotson, Frank Ntilikina is ‘probable’ with a groin injury.Â  This the same nagging injury that he dealt with all last season, limiting him to 43 games.

Coach David Fizdale said that sitting Ntilikina, and everyone really, is more a precautionary measure.Â  The Knicks are starting the season off with a lot of injuries.Â  The one’s mentioned above, Reggie Bullock’s back injury and Mitchell Robinson’s overall health, which is always in question.Â  It’s not the start to a season you want.

However, all of the Knicks current guards can make a case to start.Â  Dennis Smith Jr. was the leader in the clubhouse to start the season as their point guard.Â  He has been putting in the work this summer to improve his shot and they hope it pays dividends.Â  Plus, Smith Jr. clearly has the most upside and explosiveness to run the offense.

Elfrid Payton began making his case this preseason to steal minutes from Smith Jr.Â  Payton appears to run the offense well, but that’s it.Â  He doesn’t have the offensive capability like Smith Jr., but the offense seems to sort-of smoothly with Payton.

Ntilikina started to make his case for more time with his play during the FIBA World Cup.Â  Coach Fizdale noticed his progression and will try to incorporate that into the Knicks system.Â  Ntilikina’s progress appeared through his aggressiveness and confidence in taking his shot.Â  Now, it’s about staying confident in his game and healthy to perform.

RJ Barrett will have competition with Dotson’s return.Â  But, it’s unlikely that Dotson will not overtake Barrett since he’s coming off his shoulder injury.Â  Dotson will get his opportunity, when healthy, especially since he’s a above-average defender and can provide offensive support.

Let’s not forget about Allonzo Trier either.Â  Trier has proved he can be immediate offense off the bench.Â  Even when he got the starting nod last season, he made the most of his time.Â  Everyone knows what he brings to the table offensively.Â  But, if Trier can improve his defense, he makes a strong case to be the first guard off the bench.

The New York Knicks will be juggling with different guard combinations to start the season.Â  Fizdale will try to find what works best for the team and where he gets the most out of his guys.Â  Don’t expect all the guards to easily cave, it’s going to be a battle.