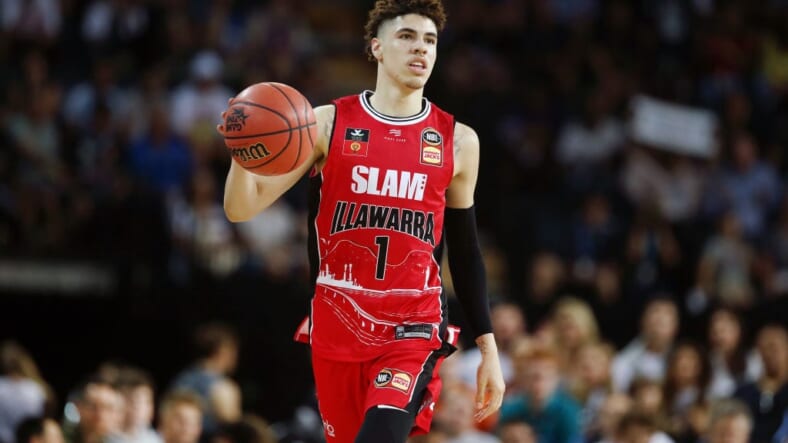 AUCKLAND, NEW ZEALAND – NOVEMBER 30: LaMelo Ball of the Hawks in action during the round 9 NBL match between the New Zealand Breakers and the Illawarra Hawks at Spark Arena on November 30, 2019 in Auckland, New Zealand. (Photo by Anthony Au-Yeung/Getty Images)

The New York Knicks need a point guard.Â  With their high pick in this years draft, one will certainly be there.Â  The only question is do they take a point guard or the best player available?Â  They need someone to make the players around them better.

If the Knicks want to turn Julius Randle into the player that everyone hoped for, heâ€™ll need a pass-first passer.Â  Thereâ€™s been rumors circulating about the Knicks wanting a pass-first point guard instead of a scorer.Â  And while, yesterday we wrote about the possibility of drafting Cole Anthony, thereâ€™s, most likely, a better option.

LaMelo could be the Knicks point guard of the future.Â  He can be the pass-first guy theyâ€™re looking for, along with elevating Randleâ€™s game.

First off, Knicks fans were furious with Randle.Â  He holds onto the ball way to long, to much one-on-one and takes untimely 3â€™s.Â  Randle has good stats, 19 points & 9 rebounds, but itâ€™s forcing shots and isolation that drives fans up a wall.

The Knicks need someone that pass and control the offense.Â  Ball could be that guy.Â  Despite only being 18-years-old, he has a big personality and isnâ€™t afraid to take command.

Now, while Ball isnâ€™t the strongest shooter, heâ€™s a great passer and can read the defense very well.Â  At 6-foot-7, he has the length to look over them and make passes.Â  Even though heâ€™s been playing professionally in Australia, he has a tremendous feel for the game, a high basketball IQ and knows heâ€™s good.Â  He could be just the point guard the Knicks need.

One of his flaws, Ball isnâ€™t the best shooter from the floor but heâ€™s a very good foul shooter.Â  While playing in Australia, heâ€™s averaged 17 points, 7 assists and 7 rebounds per game.

A player like Ball could elevate Randleâ€™s game to be more of team player.Â  Randle thought it was his team and try to take over whenever he had the chance.Â  A player like Ball controlling the offense could put Randle in check.Â  If thereâ€™s a chance, drafting Ball could be the best case scenario for the New York Knicks.