Despite Russell Westbrook coming out in the open to deny the supposed rift with James Harden, the trade chatter just wouldnâ€™t die.

Westbrook replied on ESPNâ€™s Instagram post quoting Stephen A. Smithâ€™s claim of the alleged rift, denying that the Rocketsâ€™ superstars no longer want to play together.

â€Itâ€™s my birthday, but I should say. This is completely fabricated. Yâ€™all have a good night,â€ Westbrook said. 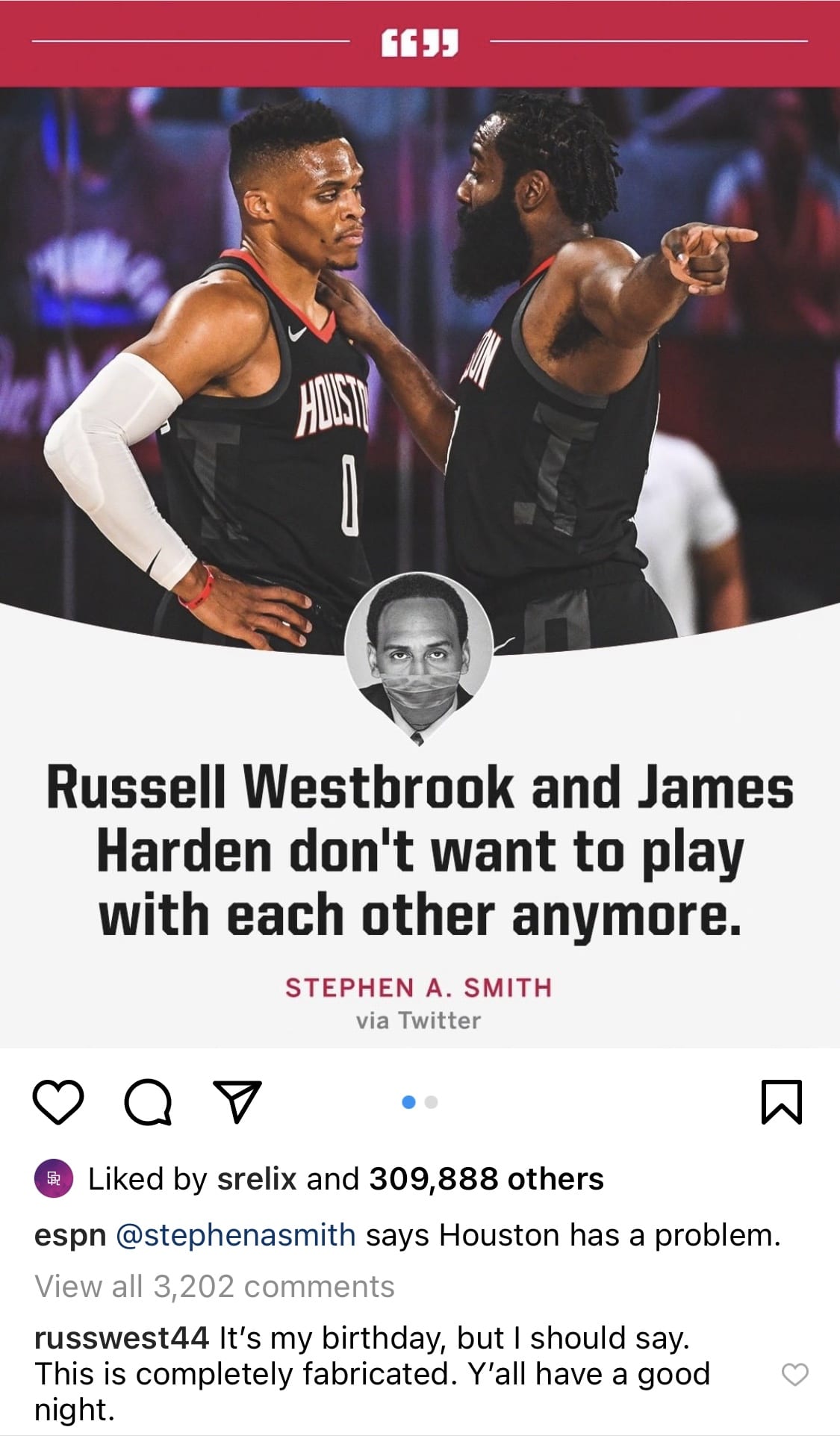 But even Westbrookâ€™s denial couldnâ€™t stop the trade chatter building up for what could be a blockbuster trade in this compressed offseason.

Marc Stein of the New York Times tweeted on Friday that the New York Knicks have weighed trading for Westbrook.

Thereâ€™s a debate whether the Knicks are willing to absorb the massive $132.7 million left on his five-year, $206.8 million contract.

The Knicks are on the shortlist of viable trade destinations for Houston’s Russell Westbrook, league sources say

If the Knicks prove willing to absorb the $130+ million left on Westbrook’s contract to make him their centerpiece, there is a trade to be made

They have weighed it

The Knicks are one of the only few teams who can absorb Westbrook’s contract without having to match salaries. The other teams who have cap space are the Atlanta Hawks and Detroit Pistons.

Jonathan Macri of the New York Film School, on the other hand, wrote in his Friday newsletter that a package centered on Julius Randle had been discussed.

â€œAccording to multiple league sources, the Knicks have discussed the specifics of a package that would bring the 2016-17 NBA MVP to New York. The sources indicate that none of the Knicksâ€™ key young pieces are on the table (read: RJ, Mitch, and as far as I can tell, Kevin Knox and Frank Ntilikina), nor will they be. The same goes for any of New Yorkâ€™s own draft picks. Iâ€™ve heard Julius Randle would be going, along with some sort of draft asset â€“ maybe 27, maybe 38, maybe one of the Dallas picks â€“ but I canâ€™t confirm which,â€ Macri wrote.

Brandon â€œScoop Bâ€ Robinson of Heavy.com also tweeted last night that the Knicks are not the only team in Westbrook/Rocketsâ€™ trade partner wishlist.

I’ll preface this by saying: I was with Russell in Tulsa, OK, the night he was traded last year.

Spoke to someone in the know: Knicks are not the only team being considered on his part…his wish list/Rockets wish list.

Knicksâ€™ 27th overall pick is something to at least pay attention to! https://t.co/TYvvU14zQS

Robinson also reported that the Rockets and Los Angeles Clippers have also discussed trading Paul George in exchange for Westbrook and Robert Covington.

Earlier this week, ESPN reported that both Westbrook and Harden had expressed concern on the franchise’s direction after parting ways with former coach Mike D’Antoni and general manager Daryl Morey.

The Rockets, who elevated Rafael Stone from assistant to general manager, and hiring first-time head coach Stephen Silas, have maintained they are still committed to contending for the title around their superstars.