Knicks should only be in on Westbrook for the right price 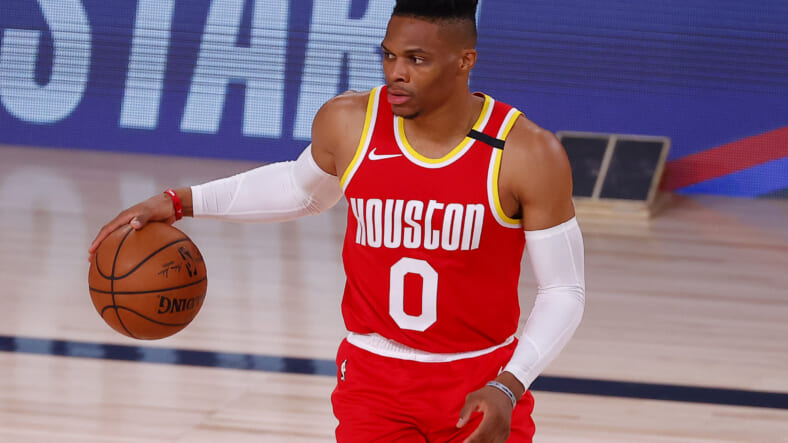 The NBA offseason is officially underway. Trades officially can be made as of Monday at noon, and the NBA Draft is Wednesday, which is then followed by the start of free agency on Friday. Itâ€™s going to be a jam-packed and super exciting week that will have NBA fans glued to Twitter trying to keep up with everything. As for the New York Knicks, there has been the usual influx of trade, draft, and free agency rumors, and one big name that they are reportedly interested in is star point guard Russell Westbrook.

Westbrook has quickly become the center of Knicks chatter over the past couple of days, especially after seeing long-rumored trade target Chris Paul land in Phoenix.

There are positives and negatives to bringing in any player, especially one of Westbrookâ€™s caliber. The 32-year-old is a future Hall of Famer with nine All-Star appearances and one MVP award under his belt. He is still playing at a very high level and has shown no clear signs of regression, averaging a stat line of 27.2 points, 7.0 assists, and 7.9 rebounds per game for Houston last season.

Westbrook is also one of the fiercest competitors the game has ever seen and plays with an unmatchable level of energy every second heâ€™s on the court. He is a player whose work ethic and toughness would fit right into the kind of culture that Tom Thibodeau wants to build in New York, and he brings the kind of star power to Madison Square Garden that the Knicks havenâ€™t had since Carmelo Anthony.

With all that being said, it would only be logical for the Knicks to make a move for Westbrook, or anyone for that matter, for the right price. As many positives as there are with Westbrook, there are negatives as well. His game is centered around his explosiveness, and that kind of playing style has resulted in multiple knee surgeries throughout Westbrookâ€™s career, which will only increase as he continues to get older in age.

Thereâ€™s also the issue of his massive contract. Entering the third year of a 5-year, $206 million dollar deal, Westbrook will be due over $41 million this season, $44 million in 2021, and $47 million in 2022. Thatâ€™s a hefty price to pay for an aging point guard with some injury concerns.

Now, that doesnâ€™t mean the Knicks shouldnâ€™t entertain the possibility of a Westbrook trade. Westbrook is still one of the best point guards and overall players in the league, and heâ€™d fill a huge need in a massive way. If they can acquire him and keep important assets like RJ Barrett, Mitchell Robinson, and the 8th overall pick in Wednesdayâ€™s draft, then they definitely have to consider it.

If they have to give up one or more of those assets, then it would be best to hold on to what they have and explore other ways to improve the team. After all, the Knicks giving up everything for an aging, oft-injured star is all too familiar for Knicks fans. Giving up all their assets for Westbrook would show that the Knicks havenâ€™t learned anything over the past 20 years and keep making the same mistake over and over again.

So, while Brodie in the Mecca would be must-see TV and a hot commodity, the Knicks shouldnâ€™t value that as reason to blow up everything they have been building and accumulating over the past few seasons.