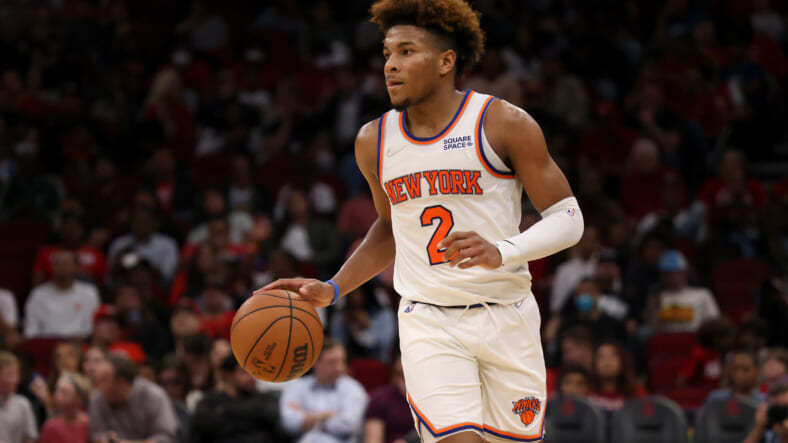 When the New York Knicks inked Derrick Rose to a three-year extension and signed Kemba Walker to a two-year deal in free agency, the front office was preparing to mitigate fatigue and injury throughout the entire season.

However, while they thought one would be able to supplement the other, the injury bug has hit the point guard position for the Knicks at an inopportune time.

Luckily, they spent one of their draft elections on West Virginia stand-out PG Miles McBride, this past class. The young guard has shown flashes of quality in just four appearances with 20 minutes or more on the floor.

After Kemba Walker returned from exile to post vintage numbers, he suffered a left knee injury during pregame warm-ups on Friday that could keep them out for several days. Head coach Tom Thibodeau was unsure of the severity after the game, but the Knicks will run more tests to determine how long he will miss.

“I don’t know, because he started his warm-up, and then he stopped. And then [trainer] Anthony [Goenaga] was looking at him and just felt, let’s get him examined, and then we’ll go from there.,” Thibs said regarding the severity.

McBride, though, is more than capable of filling the void in the meantime. In fact, the essential experience McBride will enjoy could help take his game to the next level.

The Knicks know what Miles McBride can do:

The defensive maestro has shown flashes in nearly every category, scoring 15 points against the Houston Rockets on December 16, paired with nine assists, showcasing his facilitation. He also recorded four steals in that game, presenting a difference-maker off the bench.

Against the Detroit Pistons on December 29, he posted a +39 +/- despite scoring zero points. His defensive efficiency was incredible, making him extremely valuable to the next double-digit comeback in the fourth quarter.

It is possible that Thibodeau relies on Alec Burks as the primary starting PG while Walker recovers, and even Immanuel Quickley can earn some minutes, but McBride offers solid defense on an every-night basis, which is something he prefers.

Giving McBride an opportunity to start and showcase his qualities as he shakes off the jitters could end up being fruitful. He was forced into the starting slot against the Oklahoma City Thunder, which he wasn’t prepared for. He finished with seven points and one assist over 24 minutes.

The Knicks are preparing to take on the Toronto Raptors on Sunday night, and McBride will undoubtedly have a major role in helping his team back into the win column.