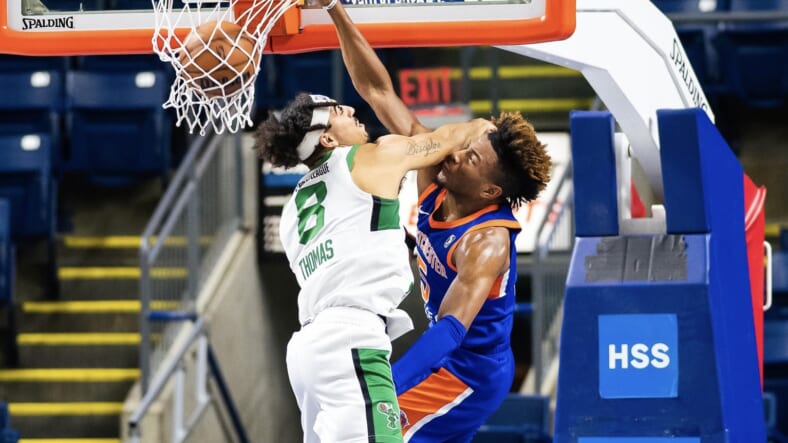 New York Knicks rookie point guard Miles McBride had another solid game in his second G League assignment. But it was not enough as the Westchester Knicks fell short against the Maine Celtics, 110-100, Monday night at Webster Bank Arena.

McBride finished with a G League career-high 28 points highlighted by a thunderous in-your-face slam in the second quarter.

â€œJust really attacked the rim as hard as I can. I missed a couple of shots, so itâ€™s [letting] frustrations [out],â€ McBride said of his highlight dunk.

McBrideâ€™s frustrations did not go away as the Celtics led by as many as 24 points in the second half. The Knicks blew a 12-point lead in the opening quarter to slide to a 2-6 record.

Not even McBrideâ€™s complete line could save them.

The 36th pick of this yearâ€™s NBA Draft shot 11 of 25 from the field and made 5 of 12 3s. McBride filled the stats sheet with six rebounds, five assists, three steals, and one block against two turnovers in 41 minutes.

Samanic scored Westchesterâ€™s first 11 points in the fourth quarter as they cut the lead down to 14, 92-78. Back-to-back three-pointers from Tyler Hall, who had 25 points, and McBride brought them within eight, 92-84. It was the closest they could get as former Knick Theo Pinson answered with a three-pointer to restore Maineâ€™s double-digit lead.

The Celtics improved to an East regional pod-leading 7-1 record.

The Knicks will host the winless College Park Skyhawks (0-5) on Thursday.