Knicks: RJ Barrett not too worried about shooting funk 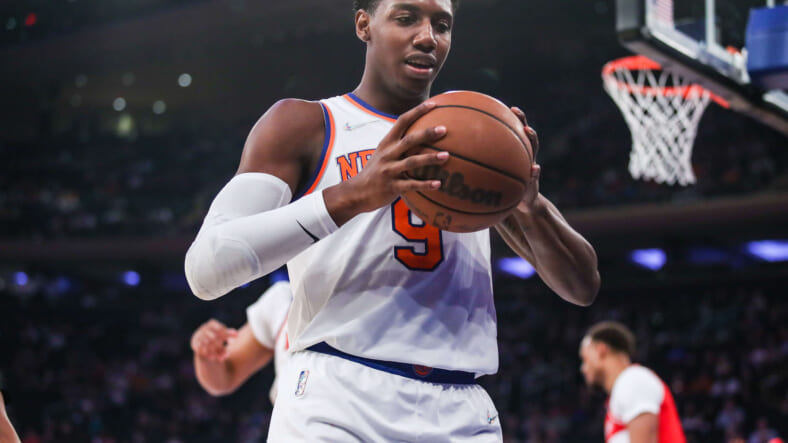 New York Knicksâ€™ third-year wing RJ Barrett returned on Saturday after a non-Covid illness caused him to miss his first game over the last two seasons. But he also returned to his shooting slump that hastened their ugly loss to the Denver Nuggets.

Barrett shot just 38.5 percent from the field, including a horrendous 1 of 7 from downtown. Over his last 15 games, Barrett had only two games when he shot above 40 percent of his 3s. Both games ended in Knicksâ€™ victories â€” a 3-of-7 outing against the Indiana Pacers and the 3-of-5 performance against the Los Angeles Lakers.

In his last 16 games in which the Knicks went 6-10, Barrettâ€™s three-point shooting hit rock-bottom at a 23.9 percent clip. His 38.2 percent three-point shooting mark to start the seasonÂ that crescendoed in New Orleans, where he hit 6 of 8 triples, capping a fiery Knicksâ€™ 5-1 start, became an afterthought.

â€œNo idea,â€ Barrett said Saturday of his recent shooting slump. â€œI think [that usually happens], especially at the beginning of the year, when a team is trying to figure itself out and also figuring out the shots that Iâ€™m going to get during the game with this team with new players, and I think Iâ€™ve kind of figured that out now.

His three-point shot diet increased this season despite the addition of the now-banished Kemba Walker and Evan Fournier. In his first 23 games last season, Barrett only attempted an average of 3.8 3s compared to 4.9 per game this season.

Barrett and his trainer Drew Hanlen worked on the Knicks wingâ€™s off-the-bounce game this past summer. But so far, it hasnâ€™t translated yet in his three-point accuracy.

According to the NBAâ€™s tracking stats data, Barrett is hitting only 24 percent clip from 1.3 pullup 3s attempts per game this season. Last season, Barrett attempted only 0.3 of that type of shot per game, and he was 30 percent accurate.

New York coach Tom Thibodeau, who was effusive in praising Barrettâ€™s work ethic until Saturdayâ€™s loss, had a more revealing and interesting view about his wardâ€™s shooting funk.

â€œA couple of things — itâ€™s similar to last year,â€ Thibodeau said. â€œI have a lot of confidence in him being able to work his way out of it. When you throw in, heâ€™s been sick, and to me, you get rhythm when you work.â€

â€œLast year, he got going when he started coming in every night to shoot. So thereâ€™s no notion that â€˜okay, I do it sometimes.â€™ No, you got to do it all the time.â€

Last season, Barrett ended up shooting 40.1 percent from deep after also enduring an early-season slump when he missed 21 straight three-pointers over a four-game stretch.

â€œSo get back in the gym, get back to grooving your shot. Shoot a lot of 3s, and youâ€™ll start making more,â€ Thibodeau implored.

But Barrett doesnâ€™t need Thibodeau to tell him to get back to his nightly routine because that was always his plan after his recent bout with the non-Covid illness that made him throw up in their loss in Brooklyn last week. Barrett had to shut down for two days. After Saturdayâ€™s matinee, Barrett said that the illness was completely gone, and he was ready to return to his routine.

â€œGo back to the basics, which you know works,â€ said Barrett on how he plans to attack his shooting funk. â€œAfter that, everything will figure itself out.â€

Barrett is confident, too, that heâ€™ll work his way out of this another shooting slump.

â€œIâ€™ve just been working on the shots that I know Iâ€™m going to get. Iâ€™ve been in shooting funks before. Iâ€™m not really too worried about it,â€ Barrett said.

Barrett is more concerned with the whole team figuring out their defense.

â€œIf weâ€™re gonna play defense, we gotta fight and fight together the whole game and just do whatever it takes to win.â€