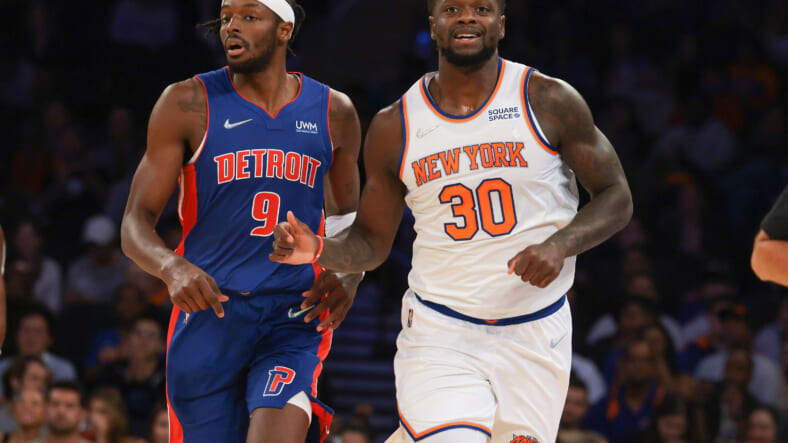 The New York Knicks overcame the Detroit Pistons by a score of 108â€“100 on Wednesday evening. The Knicks have now scored over 100 points in all three of their preseason games, with the final contest coming on Friday against the Washington Wizards at 7:30 PM.

In the victory, the starting team contributed significantly aside from Evan Fournier, who posted just five points in 26 minutes. However, the contributions of Julius Randle and Taj Gibson stood out the most, combining for 50 points on the evening.

Randle seems to be in mid-season form, shooting 11-of-19 from the field and connecting on 4-of-7 three-point shots. He also contributed 11 rebounds, five assists, and one steal. If Randle can continue building upon his first All-Star performance in 2021, the Knicks will find themselves in a great position after the additions of Fournier and Kemba Walker, who upgraded the shooting guard and point guard positions.

While Randle started the game slowly, late in the third quarter, he posted 16 of his 29 points. He shot just 40% from the field in the first half, but Randle shook off intense defense by Jerami Grant and began knocking down shots at an efficient rate.

However, Julius wasnâ€™t the only player to dominate with his shooting, as a big man Taj Gibson also had an impressive outing, contributing 21 points. Gibson shot 9-of-14 from the field and even hit a three-point shot while picking up nine rebounds to assist and two blocks.

Gibson displayed his shooting abilities from the mid-range, bringing another element to a team that lacked a scoring center. While Gibson is a reserve option as Mitchell Robinson is expecting to make a return in the final preseason game, he can clearly constitute in a unique way.

The Knicks have also asked Nerlens Noel to begin taking shots and helping the offense in that fashion, so we could see a more modernized approach from Tom Thibodeauâ€™s team this upcoming season.

Nonetheless, the Knicks are off to a phenomenal start having beaten all three of their preseason opponents by eight points or more. While the preseason doesnâ€™t exactly indicate how the team will perform during the regular campaign, it gives us a good idea of the player’s chemistry and momentum as we near October 20 against the Boston Celtics.