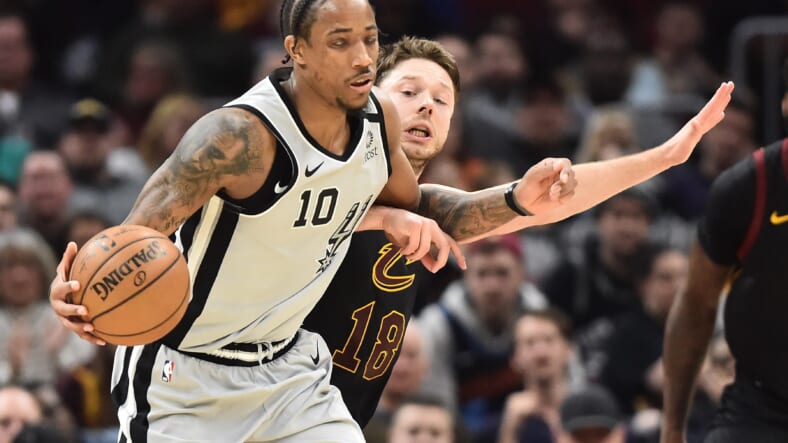 With plenty of money to spend during free agency, the New York Knicks have her eyes set on a number of different targets. Just about every solid player available has been connected to New York in one way or another, and the latest is swingman DeMar DeRozan, whoâ€™s coming off a five-year, $139 million deal with the Toronto Raptors and then the San Antonio Spurs.

DeRozan is a 31-year-old veteran on the verge of 32. With the ability to play shooting guard, small forward, and power forward, DeRozan is a fantastic scorer, averaging 21.6 points, 6.9 assists, and shooting 49.5% from the field this past year. He doesnâ€™t offer much as a three-point shooter, so expecting him to dominate in the paint, driving to the basket — a team like the Knicks would value bully-ball inside and solid defense. Having played power forward this past season with San Antonio, he would likely have to return to his shooting guard status, which is his traditional position.

The Knicks could be intrigued by his services, given his experience with some great teams and scoring prowess.

According to The Undefeated’s Marc J. Spears, several teams, including the Los Angeles Lakers, Los Angeles Clippers, New York Knicks, and Chicago Bulls, are all interested in DeMar DeRozan’s services.

The New York Knicks could have competition for point guard Derrick Rose:

K.C. Johnson of NBC Sports Chicago coined Derrick Rose as a secondary target for the Bulls but is a possibility after a successful season with the Knicks.

Rose is coming off a successful season with New York, averaging 14.9 points, 4.2 assists, shooting 48.7% from the field. He also connected on a career-high, 41% from three, showcasing that he has plenty of gas left in his tank.

If the Knicks are looking to retain most of their cap space for next year, signing Rose to a one-year extension could be a perfect move, if heâ€™s willing to settle on a short-term deal. Bringing back Rose would allow the Knicks to draft a young point guard with upside, who the veteran can mentor and groom for the future. This would be a perfect scenario to allow Derrick to stay in New York, a place he fancies, and to extract the most from Argentinian native Luca Vildoza.

For example, a combination of point guards, including Rose, Davion Mitchell, and Vildoza, could inspire success moving forward. One way or another, the front office needs to allocate resources toward the PG spot, and bringing back Rose would be a welcomed reality for most fans.

What do you think about the idea of signing DeMar DeRozan and retaining Derrick Rose? Comment below!