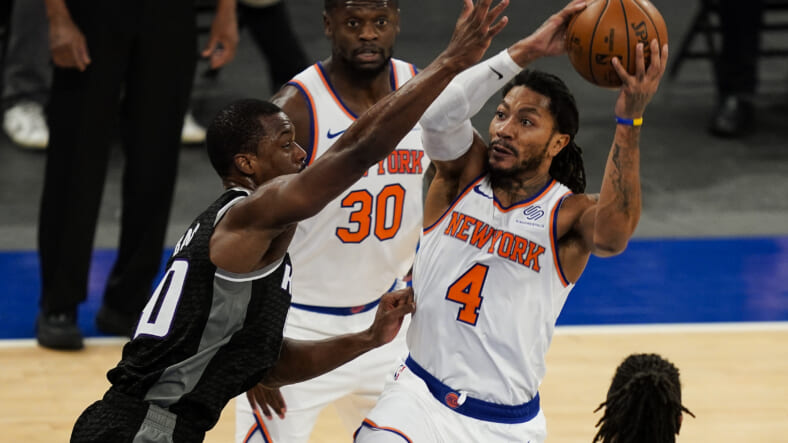 The New York Knicks are set to take on the Milwaukee Bucks on Thursday evening, which should present a significant challenge. Milwaukee is coming off six wins over seven games, so they will be no easy contest for New York, who will be without starting point guard Derrick Rose, and his return is still up in the air for the remainder of this week.

Head coach Tom Thibodeau was skeptical that Rose would make a return within the next few days, but heâ€™s confident that their youth can get the job done in the meantime. The league mandates that a player must be out for 10 days and then work out for an additional two days before returning from positive Covid tests. Luckily for Rose, the All-Star break gave him a good cushion to work off of, but he still has a bit more time to waste until he can make an official return.

â€œTo be honest I canâ€™t answer that because I donâ€™t know,â€™â€™ Thibodeau said when asked if Rose would be returning to the team soon. â€œIâ€™m following what Dr. [Lisa] Callahan and what the league says. Once thereâ€™s clearance heâ€™ll be available. When we get updated, weâ€™ll update you guys. Youâ€™ve seen it throughout the league how itâ€™s been handled. We know itâ€™s serious it is with COVID and we want to take every safety precaution we can.â€™â€™

How is Mitchell Robinson’s rehab coming along?

The Knicks expected starting Center Mitchell Robinson to be out for quite some time after fracturing his hand several weeks ago. It seemed as if he was making solid progress but is still ways away from a return. In his absence, Nerlens Noel has stepped up in a big way, averaging 4.9 points, 2.0 blocks, and 6.1 rebounds over 22.2 minutes. His defense has been the catalyst for New York at times but doesnâ€™t offer much on offense.

â€œThereâ€™s still no set timetable,â€™â€™ Thibodeau said. â€œHeâ€™s starting to do more. Weâ€™re probably a little ways away. But the conditioning, heâ€™s been very diligent in putting extra work in. so his conditioning is pretty good. The basketball part, he hasnâ€™t been able to scrimmage or anything like that. But heâ€™s handling the ball with his left hand and doing a lot of running. We just have to be patient and let it run itâ€™s course.â€™â€™

Luckily, Robinson will make a return at some point this year, and hopefully, the Knicks are in a spot to make a playoff push. Getting back one of their essential pieces will hopefully be a major boost, and we can only hope his rehabilitation goes well.