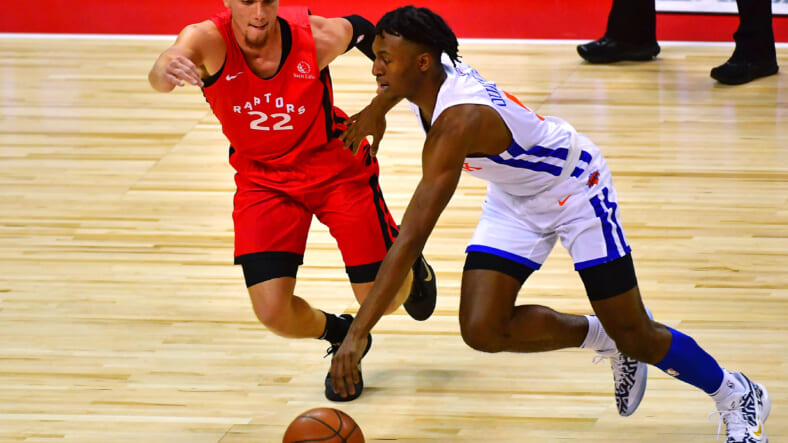 It was only a few months ago that the New York Knicks were heavily connected to star guard Damian Lillard in a potential trade scenario. Of course, Lillard elected to stick with the Portland Trailblazers after signing a big extension, but that doesnâ€™t mean he wasnâ€™t intrigued by the concept of moving to New York and joining a team that is up-and-coming with fresh young talent.

In fact, Lillard expressed his fandom for Knicks young guard Immanuel Quickley, who is entering his second season in the NBA. Last year, Quickley averaged 11.4 points, 2.0 assists, and shot nearly 40% from the field. He also connected on 39% of his shots from three-point range, tacking on 89% free-throw shooting. Having a player of his quality off the bench is a major benefit for a Knicks team that will be rotating combinations of players to keep their stars fresh for an entire 82 game season.

â€œImmanuelâ€™s game has that craft and flow. Creativity is hard to guard. He can be that Lou Will or Brandon Jennings for the Knicks. Coming off the bench to cause havoc for the defense. Heâ€™s like the new age pure hooper.â€

Quickley has the flow and instinct is to be an impact player for New York moving forward. Developing his floater game and learning from veteran point guard Derrick Rose, the former Kentucky stand-out, has the attributes to not only feature as a shooting guard but potentially be a long-term solution at point guard as well.

During Summer League play, the Knicks featured Quickley primarily at point guard, as he averaged 33.5 minutes over five games. He posted 20.2 points, 3.8 rebounds, and an impressive 7.8 assists. He ranked second in the entire Summer League competition in assists only behind Payton Pritchard, who posted 8.5.

However, Quickley had a tough time shooting, connecting on just 33.7% of his attempts and shot 24% from three-point range, launching 10 shots per game. Clearly, the Knicks wanted to get him as much action as possible in preparation for the 2021-22 season.

Earning high praise from players like Lillard is a great sign for Quickley regarding his development and potential influence. If he can continue to grow and expand his skill-set, he could end up being a 6th-man candidate for the Knicks and potential starter down the road. At just 22-years-old, he has plenty of untapped potential left to be exposed.