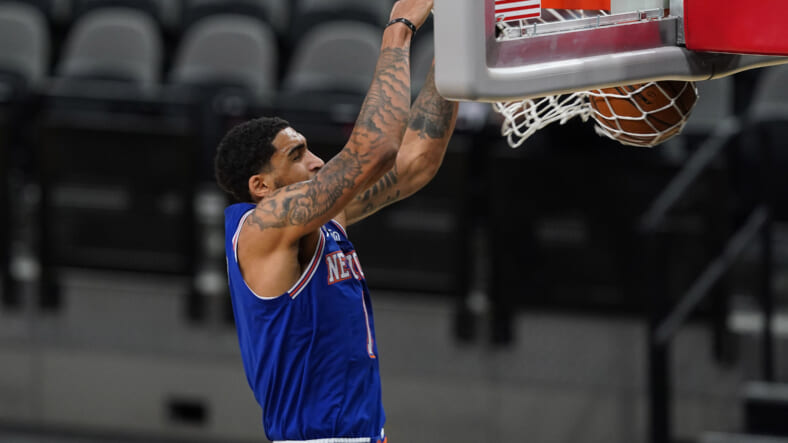 The New York Knicks were embarrassed by the Dallas Mavericks on Friday night, who completely controlled them down the stretch. Falling 99-86, New York has had significant problems with their offense, reaching 100 points just once in the past three games, and barely against the worst team in the NBA, the Minnesota Timberwolves. Against Dallas, their star players fell ill to hopeful expectations, with Julius Randle scoring 14 and RJ Barrett eight.

However, the Knicks experienced one solid performance from the eighth overall pick this year, Obi Toppin. Toppin played just 11 minutes, going 4-of-5 from the field, and scored nine points. He also collected two rebounds and one steal, earning +5 +/-.

Fellow teammate Julius Randle was ecstatic for the rookie, who had struggled this season prior to the matchup against Dallas. Heâ€™s averaging just 4.2 points, 2.2 rebounds, and .486 from the field over 11.7 minutes per game. Alternatively, Immanuel Quickley has earned far more playing time and more opportunities to showcase his abilities.

Despite Toppinâ€™s performance, the Knicks are in a bit of a funk, losing their last three games. They quickly need to get out of this bad string of performances, as they take on a lowly Detroit Pistons team on Saturday at 8 PM.

â€œWeâ€™re in a little bit of a funk and weâ€™ve got to work our way out of it,â€™â€™ Thibodeau said.

The Knicks have a significant advantage over Detroit, who are coming off a win over the Washington Wizards. Nonetheless, theyâ€™ve lost six of their last eight games, with just 14 wins and 34 losses this season.

The leading players for Detroit are Jerami Grant, who is averaging 22.5 points per game, and Josh Jackson, averaging 13 points per. Ultimately, this should be an easy one for the Knicks, considering they traded a majority of their team away at the deadline and donâ€™t have any bonafide star players. However, New York does have to keep an eye on Hamidou Diallo, who has been killing it for Detroit recently, averaging 14.7 points in his three games with the team.