Knicks’ Julius Randle has legitimate beef with officiating Vs Brooklyn 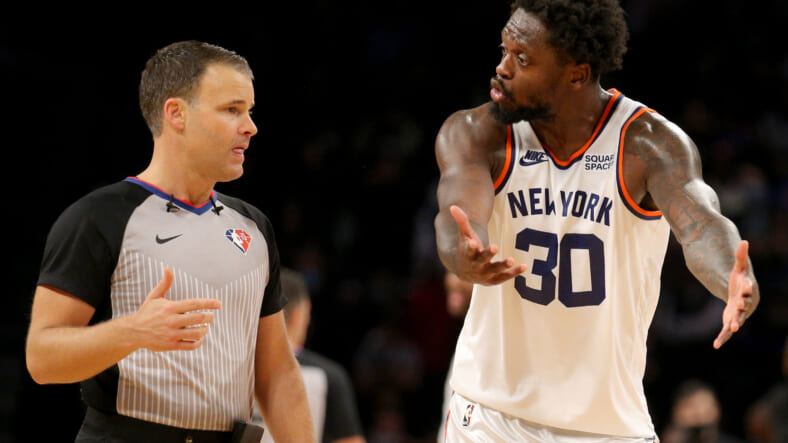 The New York Knicks lost a shoot-out with a Brooklyn Nets on Tuesday evening 110-112, but it wasnâ€™t without its controversial takes. Even the Knicks were disappointed with the officiating in the defeat, specifically regarding power forward Julius Randle and the lack of calls that went his way despite barreling toward the rim, looking to score from close range.

However, the contact Randle received in the process went unnoticed, as players like James Harden and Kevin Durant enjoyed 10 total trips to the free-throw line.

“Got to ask them,” Randle said of the officiating Vs Brooklyn. “I don’t know what they’re watching or what they’re seeing. As aggressive as I played, attacking the paint, I can’t be penalized for just being stronger than people. And that is an answer that I got today.”

“They said because certain contact doesn’t affect me like it affects other players,” Randle said. “Because I am stronger, they miss the calls.”

The justification by the officiating crew makes no sense. Indicating that Randle is simply stronger and therefore impervious to fouls is hard to comprehend. In fact, he suggests that being weaker and reacting more emphatically to contact is preferred if a player is looking to get to the free-throw line — AKA flopping.

“It pisses me off even more,” Randle said. “To be honest with you, because that is not how you officiate the game.”

Randle has a solid argument and will likely be fined nonetheless by the NBA for his reaction toward the officiating. The Knicks’ best player finished the game with 24 points, eight assists, and nine rebounds. He just marginally missed a triple-double, but the impact of new point guard Alec Burks has bolstered the starting unit tremendously. Randle did his best to step up and lead the team to victory, coming up just short of a much-needed win.