Knicks’ Julius Randle has hostile message for the haters 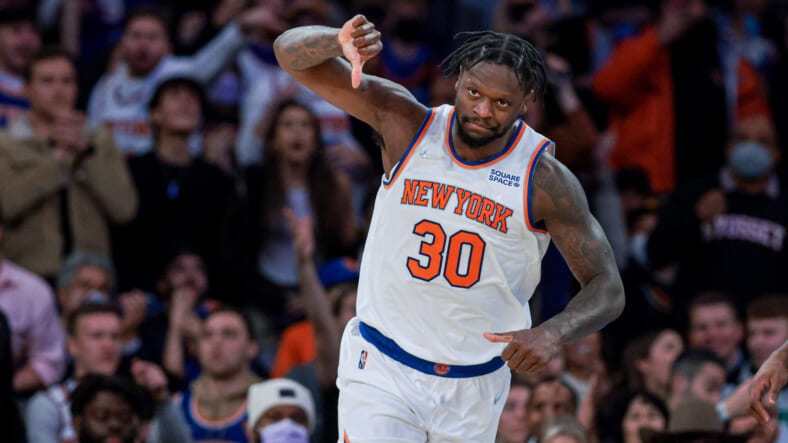 The New York Knicks might’ve emerged victorious against the Boston Celtics on Thursday night, but power forward Julius Randle had a message to send to the fans after they’ve hurled insults at him for the better part of the season.

Randle has struggled after having an All-Star campaign in 2020 — some might say he’s regressed to the mean, but he is still the Knicks’ leading scorer with 19.6 points per game. In addition, he’s contributing 10.1 rebounds and 4.9 assists, which are significant numbers the team felt during his absence against the Oklahoma City Thunder and Toronto Raptors.

After the team’s 25 point come-back win over Boston, a reporter asked Randle about the Knicks being outplayed despite the win, in which he responded maliciously:

“Shut the f— up,” Randle said with frustration coursing through his voice.

Julius finished the game with 22 points, eight rebounds, and two assists. He shot just 25% from three-point range but connected on 40% from the field. The veteran forward had a few clutch shots down the stretch, helping give the Knicks a slim lead late in the fourth quarter.

Nonetheless, his statistical production has been inconsistent this year, hitting just 32.7% of the shots from deep compared to 40% last year before he signed a four-year, $117 million contract extension.

While Randle may indicate he ignores the outside pressure, his outburst was clearly targeted at the haters who have been attacking him for a myriad of reasons.

“Everyone thinks the backup should start until he has to start.”

During Randle’s bout with Covid, Obi Toppin stepped in to soften the blow, contributing a career-high 19 points against Toronto, but he has scored a combined two points over the last two games, playing just 19 minutes in total.

It is clear that Randle has shown he’s the team’s primary leader, indicated by the Knicks winning back-to-back games since his return. However, you don’t want to see your star player attacking the media and failing to accept criticism in a market that seeks out vulnerable players.

Randle seems to be fully healed from his nicks and nacks, which Thibodeau mentioned several weeks ago as a potential reason for his feeble performances. During the fourth quarter against Boston, though, he unleashed a mysterious thumbs-down motion after making an impressive basket beneath the rim with defenders crowding him. At first glance, it seemed to be a big statement toward the fans who have been quite hostile toward his services this season.