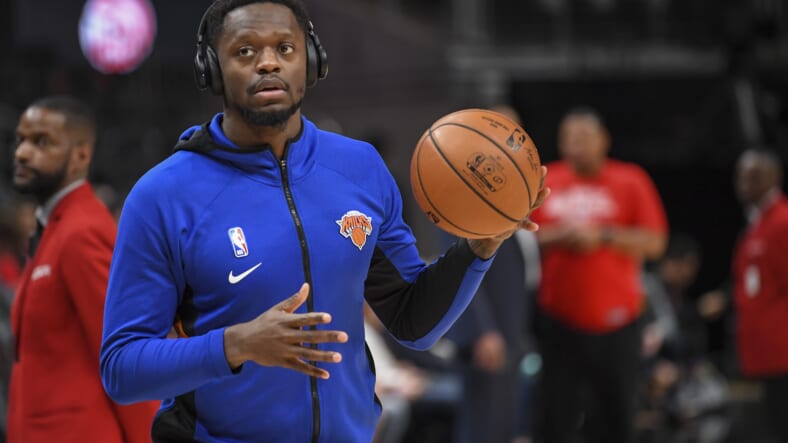 The New York Knicks overcame a pesky Chicago Bulls team on Wednesday evening, 107-103. The Knicks are just three games back from being a .500 team, and accumulating this victory was a necessity after losing two straight. Against the Bulls, the Knicks started off extremely valiant, scoring 34 in the first quarter and taking a 19 point lead at one moment in the game.

Thanks to another outstanding performance from Julius Randle, the Knicks managed to close out a game that they nearly blew in the fourth quarter. Randle finished with 27 points, six assists, and six rebounds. While he missed both shots from the free-throw line, he had over 50% from the field and connected on 5-of-7 three-pointers.

Randle detailed one major difference in his game compared to last season, which is proving to be a significant factor in his success this year.

â€œHonestly, it just wasnâ€™t a great season shooting the ball from 3 last year,â€™â€™ Randle said. â€œItâ€™s something I got in the lab and tightened things up. Repetitions and confidence, man. My mental approach is completely different. I have unlimited confidence in it.â€™â€™

The New York Knicks needed Randle to turn one category around:

The 26-year-old power forward finished the 2019â€“20 season with a .277 three-point percentage. This season over 23 games, heâ€™s averaging .396, and shooting the ball from downtown, even more, indicating a major upswing in efficiency.

Julius has been a catalyst for the Knicks on offense, dominating daily and quickly earning himself an All-Star nod. Head coach Tom Thibodeau expects this of him, leading his team into battle and showing aggressiveness on both sides of the ball. He did that against Chicago, helping his team finish out the game and secure the win.

â€œThatâ€™s what we expect from him â€” a veteran leader, play strong on both sides of the ball, share the ball, make the right plays and set an example for everyone,â€™â€™ Knicks coach Tom Thibodeau said. â€œHe gives the team the belief we can win. You get that by making hustle plays. The more hustle plays, the more it ignites and inspires the team. Thatâ€™s what we expect from him.â€™â€™