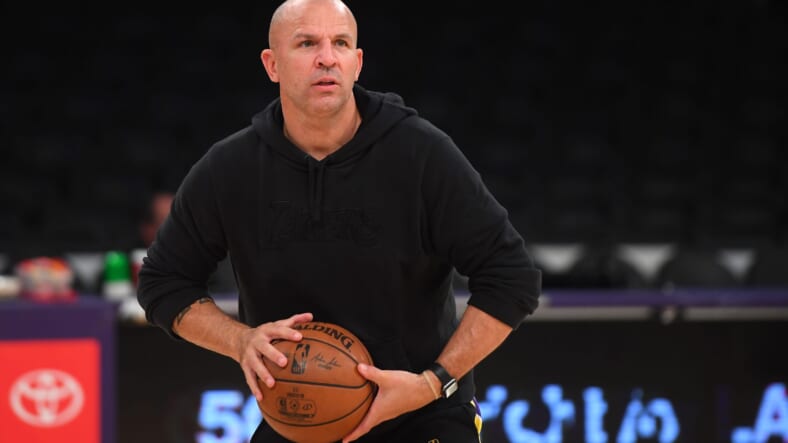 The New York Knicks have received permission from the Los Angeles Lakers to interview Jason Kidd for their head-coaching vacancy per Marc Stein of the New York Times.

The Knicks have requested and received permission to interview the Lakers' Jason Kidd for their head coaching vacancy, @NYTSports has learned

Kidd is currently in his first season as an assistant with the Lakers on head coach Frank Vogel’s coaching staff.

Steve Popper of Newsday says that Kidd would have “interest” in coaching the Knicks. Popper also says that some teams see the former point guard as a “link” to Milwaukee Bucks superstar Giannis Antetokounmpo, a free agent after the 2020-21 NBA season.

Sources close to Kidd have said that he would have interest in this job (he played for Dolan and Knicks in last successful season for NY) – and some teams interested in Kidd think that he could provide a link to the prize of next year's free agent class, Giannis. https://t.co/dlaYw7Oa1m

Kidd rounded out his NBA career with the Knicks (the 2012-13 NBA season) and is a 2018 inductee into the Naismith Hall of Fame. Outside of the Knicks, he played for the New Jersey Nets, Phoenix Suns and Dallas Mavericks (twice).

Kidd was named the head coach of the Brooklyn Nets in 2013 and had a reported power struggle with management after the 2013-14 season, leading Kidd to be traded to the Bucks. He coached the Bucks for three and a half seasons. Kidd was fired during the 2017-18 season and didn’t coach in the NBA the ensuing season.

Thibodeau, a former CAA client under Rose, has been considered the favorite for the job. The former Timberwolves and Chicago Bulls head coach was an assistant for the Knicks from 1996-2003. According to SNY‘s Ian Begley, Atkinson has “legitimate internal support within the organization” to get the job.