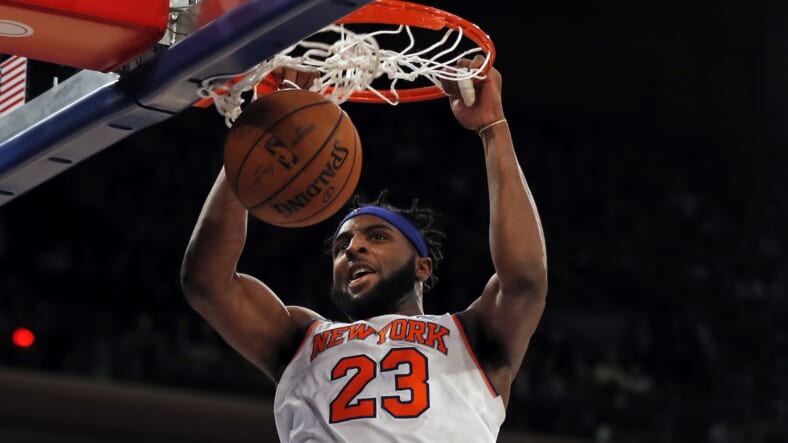 More than six months since he underwent surgery to repair a broken foot, Robinson has been medically cleared to take some contact. But the Knicks remain cautious and not in a rush to bring back the 23-year old center to the active lineup.

[He’s been cleared for] Some contact but he hasn’t gone through contact [drills] in practice,” Thibodeau said after Wednesday’s practice. “So that would be the next step. You can’t go from zero to a hundred, there’s a build-up that he has to go through.”

Robinson, according to Thibodeau, looks great in practice despite being limited to non-contact drills. He didn’t provide a specific timeline for when Robinson will progress to the last hurdle of his recovery.

“He’s coming along. Again, we’re not going to rush it. But he’s making progress every day. He’s doing more and more so we just have to be patient,” Thibodeau said.

“We work our way through it and when he’s ready to go, he’ll go. But he gives us an added dimension. So he’s done a good job with all the things that he can do. He’s picking things up in practice basically doing non-contact [drills] in practice. So the next step will be the contact and then once you can get through that then he’ll be ready to go.”

The Knicks picked up an impressive win in their preseason opener against Indiana Pacers despite the continued absence of Robinson in the lineup. Nerlens Noel also did not play though Thibodeau said he was given the day off. The plan is to rest a key rotation player in each preseason game.

“[We’re] Just letting it happen organically that when someone needs a day [off], they get it,” Thibodeau said. “Our job is to make sure everyone is ready and so every day, everyone who’s here we’re working with to prepare them for when their opportunity comes, and to Jericho’s credit when he was called upon, he was ready to go. And so we expect that of everyone.”

Rookie Jericho Sims, the 58th overall pick, came through with a solid performance in 24 minutes off the bench backing up the 36-year old veteran Taj Gibson.

Sims finished with eight points, six rebounds, and two assists, outworking the tandem of Indiana’s backup bigs Goga Bitadze and rookie Isaiah Jackson, who was selected 36 picks ahead of him.

Gibson stepped up big time as a starter. He was a game-high plus-minus +22 against the Pacers’ starting frontline of Myles Turner and Domantas Sabonis. The Brooklyn native played a vital role in the Knicks’ sizzling first half that set the tone for the 125-104 rout. He collected 14 points (on 6-of-9 shooting), six rebounds, three assists, one steal, and one block in 21 minutes.

The Knicks have three more preseason games before they open their season against Boston Celtics on Oct. 20. Thibodeau did not rule out Robinson returning in one of those games.

“If he can [return], great. If he can’t, that’s fine too. When he’s ready to go, he’ll go,” Thibodeau said. “His health is the priority and so he’s been cleared [for some contact] and that part is very encouraging. And now it’s the conditioning aspect of it to prepare him to play in an NBA game.”

The addition of Sims, who is eligible to play a maximum of 50 regular-season games as one of the Knicks’ two-way players, gives the Knicks some wiggle room to wait until Robinson is a hundred percent ready.

“I’m anxious to see what we look like when Mitch comes back. Obviously, Nerlens is a terrific shot blocker and rim protector and Taj has been great insurance for us. And I thought Jericho gave us really good minutes [Tuesday] night. And he’s a young guy that is learning and he’ll get better as we go along,” Thibodeau said.

While Thibodeau is anxious for Robinson’s return, that has to take a backseat for a while as he’s preoccupied with bringing along his new backcourt of Kemba Walker and Evan Fournier to his system.

So far, he liked what he saw in their preseason debut.

All starters finished in double figures, and their ball movement was crisp.

Walker commanded the pick and roll well — pulling up for mid-range jumpers when he was open and passing the ball when he got blitzed. He finished with 12 p points on 50 percent shooting and added four assists in 21 minutes.

Fournier moved without the ball and created opportunities off the dribble. The Frenchman swingman had 12 points and went 5-of-6 from the stripes.

Barrett benefited from his new backcourt’s scoring threat as he got wide open several times. He pounced on the opportunity and scored 17 points on 50 percent shooting, including 3-for-6 from the outside.

Randle still came away with a near double-double of 20 points and nine rebounds despite not dominating the ball as frequently as he did last season. He did that in three quarters. But the most significant impact of the addition of Walker and Fournier to the staring unit was on Randleâ€™s game was the quality of shots. His efficiency improved as he hit 50 percent of his shots against the Pacers.

“So you’re also trying to get ready for a season because you only have four [preseason] games,” Thibodeau said. “You know we have two new guys that we have to get into our rotation along with Mitch combing back and so that’s going to be the priority.

“And then the development of the young guys, that’s going to come in practice and we have to make sure when the ball goes up at the start of the season we’re ready to go.”