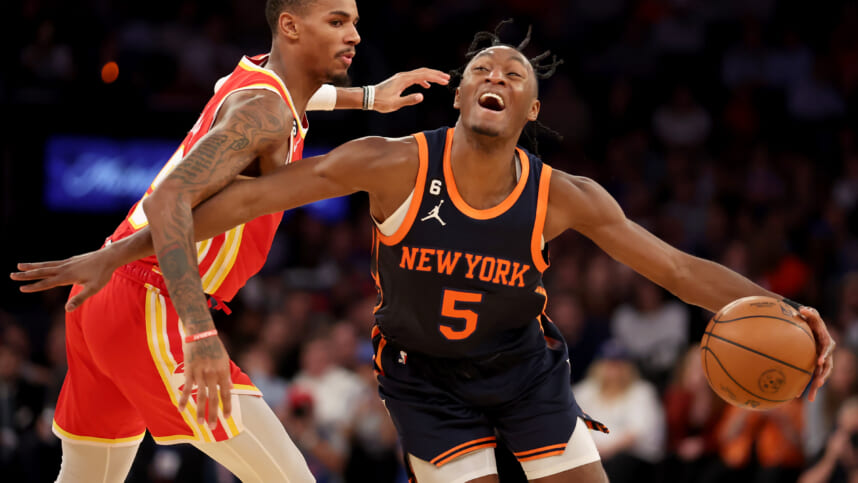 New York Knicks guard, Immanuel Quickley, finished Friday’s 121-112 win over the Detroit Pistons with 8 points, 5 rebounds, 2 steals, and shooting 3-for-6 from the field and 2-for-3 from beyond the arc. While it was not an explosive game, it was a step in the right direction after a horrific shooting slump.

Quickley was quiet through the first half of Friday’s game at the Garden, scoring 0 points and attempting only one shot. He looked to be in for another off night and continue a porous streak of games.

However, he kicked things into third-gear in the second half and made a big impact defensively, along with knocking down big timely buckets to secure the Knicks’ win.

His bounce-back performance against Detroit ends a rough shooting slump for the third-year guard out of Kentucky, as through the previous five games, he had averaged more rebounds than points (6.4 RPG, 6.0 PPG) and shot a grim 17.6% from 3-point range.

Despite his struggles prior to Friday night’s game, Quickley never showed signs of doubt. He remained poised and confident that he would turn the corner quickly (pun intended).

“It always comes back around if you put the work in. I know I’m gonna do that.”

Immanuel Quickley on his struggles via The Athletic

Knicks head coach, Tom Thibodeau, spoke on the importance of Quickley’s resurgence from outside the arc from a confidence perspective after Friday night’s win.

“Getting some easy buckets. You can run the floor hard, or move without the ball, and when you get a couple of easy buckets and that gets your confidence going and things can change real fast.”

Quickley has not gotten off to the start that he would have liked to so far this season, as he is averaging just 7.5 PPG while shooting only 34.8% from the field and 28.3% from 3-point distance.

However, it is worth noting that despite the regression in the shooting department, Quickley is improving in other impactful areas, most notably defense and rebounding.

Quickley is averaging 5.3 rebounds per game this season, which is nearly double his previous career-high of 3.2 RPG he set last season. He has shown ferocious hustle on the glass, which is incredibly impressive given his rather minuscule 6’2″ frame.

The 2020 first-round pick put his rebounding capabilities on full display with a career-high 16 rebounds on November 2nd vs. the Atlanta Hawks, a mark that is also the most in a single game by a Knicks player this season.

Quickley is also is having his best defensive season thus far, averaging nearly a steal per game and holding a defensive rating of 100.5, both being career-bests for the 23-year-old. He has continued to be an impactful player every single game, even when he is enduring a shooting slump.

While Friday was a nice sign of encouragement for Quickley, the Knicks will be sure his in-game confidence is back to 100% when the on-court success becomes sustainable. As of now, Quickley’s overall season is not desirable for him nor the Knicks, so the hope is that he can return to his best version of himself quickly (pun intended again).

Quickley will look to further improve upon Friday’s game when the Knicks take on the Oklahoma City Thunder in a Sunday afternoon game at Madison Square Garden.