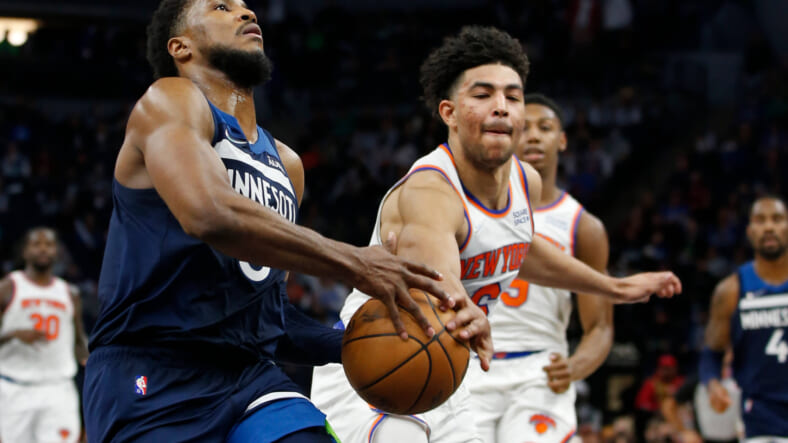 Grimes was moving with the ball with crispness, raising hopes of a Wednesday return in Indianapolis after missing the Knicks’ first two preseason games with left foot soreness that bothered him since the training camp.

The Knicks will wind up their preseason schedule on the road with a rematch against the Indiana Pacers on Wednesday (7 p.m. E.T.) and a home game against the Washington Wizards (7:30 p.m. E.T.) on Friday.

“I’m hopeful. Each day, he’s done more and more. And so there’s a progression to it. He pretty much did everything today in practice, so we’ll see how he feels [Monday]. Just follow the plan. We know what he can do.”

Grimes is primed for a big year after the Knicks held him out of the negotiation talks in the failed Donovan Mitchell pursuit.

After showing flashes of a solid 3-and-D player in his rookie year, Grimes up the ante in the NBA Summer League. The 6-foot-5 guard showed he’s more than just a spot-up shooter. His hard work earned him a spot in the All-NBA Summer League team after averaging a team-high 22.6 points and 3.4 3s per game on 41.4 percent overall shooting. He added 4.0 rebounds, 4.2 assists against 3.2 turnovers and 1.2 steals while leading the Knicks to the championship game.

Thibodeau indicated Grimes was one of the hardest working Knicks players over the summer.

“The thing is, like, he by far probably put in more work than anyone all summer. So I’m not worried about that [conditioning] aspect of it. We see him every day, sometimes multiple times in a day. And so it’s whenever he’s ready to go. This is more precautionary right now, so I know he’ll be ready to go.”

Grimes was a steal for the Knicks at the 25th pick in the 2021 NBA Draft. But ill-timed injuries have kept him from proving he should have been a lottery pick.

Last season, Grimes was on the rise when COVID-19 and dislocated knee cap sidelined him on two separate occasions.

His left foot soreness has robbed him of an early opportunity to vie for the starting shooting guard. Incumbent Evan Fournier will retain the starting spot for now owing to his chemistry with Julius Randle and the rest of the Knicks’ starting five which Thibodeau holds value.

But if Grimes’ health and two-way play get to another level as the season progresses, it will put more pressure on Thibodeau to give him more playing time.