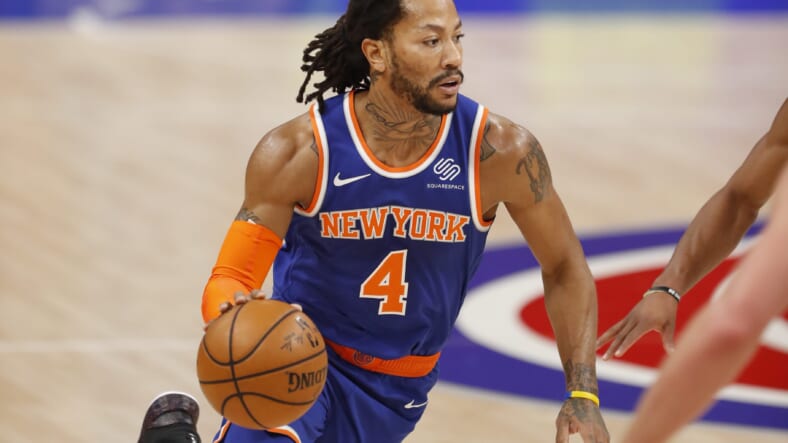 The New York Knicks have decided who their starting point guard will be, according to Derrick Rose, who signed a three-year, $43.5 million extension this off-season. Rose indicated that newly acquired point guard Kemba Walker would be the starter to open the year, but the veteran will do whatever it takes to contribute and help the team win games.

“Heâ€™s starting,” Rose said to reporters on Monday. “Heâ€™s starting and Iâ€™m doing whatever it takes to change the game. Iâ€™m not worried about minutes, playing time or anything like that. I know Thibs is going to handle that.â€

Walker signed a two-year, $17.9 million deal with the Knicks this off-season after a buyout with the Boston Celtics and Oklahoma City Thunder. Last season, Walker played in just 43 games with a knee injury that has continuously bothered him over the past few seasons.
Walker, who is making his return to MSG after spending the last 10 seasons in Charlotte and Boston, averaged 19.3 points, 4.9 assists, and shot 42% from the field last year. Curating a balancing act between Walker and Rose is likely for head coach Tom Thibodeau, who will try to mitigate fatigue for both players.

The Knicks have a great plan in place at one of their most important positions:

Ultimately, if the team can maintain their health, they will have a fantastic duo at the PG position, just one year after featuring Elfred Payton as the primary starter to open the season. Rose can be a solid contributor off the bench at nearly 33-years-old, as he contributed 14.9 points, 4.2 assists, and shot 48.7% from the field last season over 35 games. Running the second-team offense will give Rose more youth to work around, but donâ€™t be surprised to see him featuring with Julius Randle and RJ Barrett on the floor frequently.
After Rose coined Kemba as the starter, the new acquisition was taken aback by his comments. Walker explained how big a fan he is of Derrick and how winning is the primary goal this upcoming season, whether he’s starting or not.

“I mean, I wouldnâ€™t know about that. I donâ€™t know yet, but thatâ€™s pretty cool,” Walker said. “For me, Iâ€™ve always been a huge D Rose fan. Regardless, starting, not starting, whatever, it doesnâ€™t even matter. I just want to win. To have a guy like him, a former MVP, a guy whoâ€™s been through it all. To be on the same team as him is really special for me.

Kemba also explains how Rose is one of the biggest reasons he elected to come to New York, making the veteran point guards extension that much more important.

â€œD Rose is one of the biggest reasons I came here. I wanted to be around him, wanted to get a chance to see how he prepares himself every day. Just really get a chance to pick his brain as best as I can while Iâ€™m here.â€