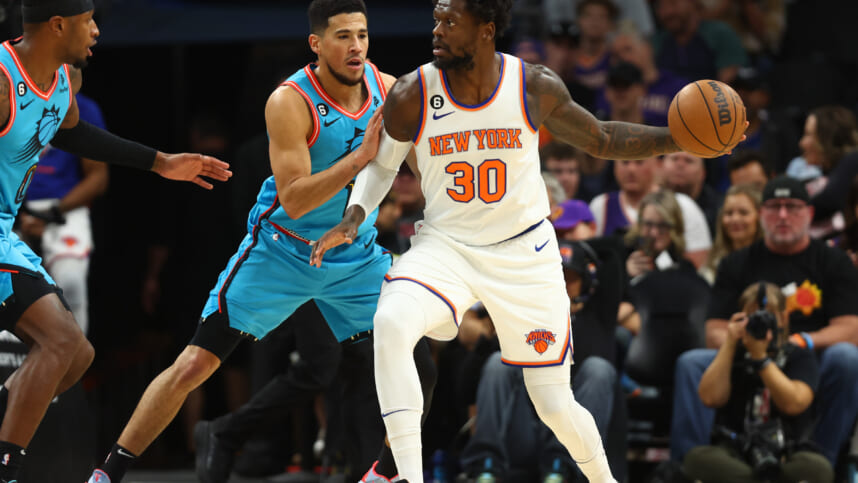 The shorthanded but scorching Phoenix Suns rained 17 3s on the Knicks’ woeful perimeter defense to run away with a 116-95 rout Sunday at Footprint Center in Phoenix, Arizona.

After trailing by only two in a competitive first half, the Knicks got outscored by 13 in the third quarter. The red-hot Suns did not relent and broke the game wide open in the fourth quarter with a 26-point lead at the halfway mark.

Not even the breakthrough performance from Quentin Grimes, who got the starting nod as Cam Reddish sat out with a sore groin, could not stop the Knicks from dropping their second straight on the road.

Grimes produced 10 points, five rebounds, and a game-high eight assists in his first start of the season, and his stout defense helped slow down Devin Booker in the first half.

But Booker turned on the heat in the latter part of the third quarter with Grimes on the bench, leading the Suns’ breakaway. Booker broke out from a 3-of-10 first-half shooting slump with 11 points on seven shots in the third quarter.

The Suns did not relent and broke the game wide open with a 26-point lead at the halfway mark of the fourth quarter. Miles McBride, who got an opportunity with Derrick Rose exiting the game with a sore right toe, capped a Knicks’ 10-0 run to cut the Suns’ lead to 26. But that was the closes they could get the rest of the way.

“I thought we played well in the first half but if you want to beat a team like this you have to play well for all four quarters, 48 minutes.”

The Knicks were locked in step with the Suns in the first half as they held the home team to 38.8 percent shooting and just six treys. Then their defense collapsed in the second half.

Mitchell Robinson returned after missing eight games but labored for two points and four rebounds in 16 minutes off the bench. He was a step slow coming off a sprained right knee injury and the Suns took advantage grabbing 19 more rebounds (69-50).

RJ Barrett’s shooting woes continued making only 3 of his 11 attempts for 12 points. Julius Randle faded in the second half as he tallied only nine points, all in the opening half.

Jalen Brunson tried to pick up the slack but his 27 points wasn’t enough.

The Knicks will be looking for a vengeance win against the Oklahoma City Thunder, who earlier beat them, 145-135, before this five-game West Coast trip.