Knicks could be targeting 3-point specialist in ‘smaller’ trade 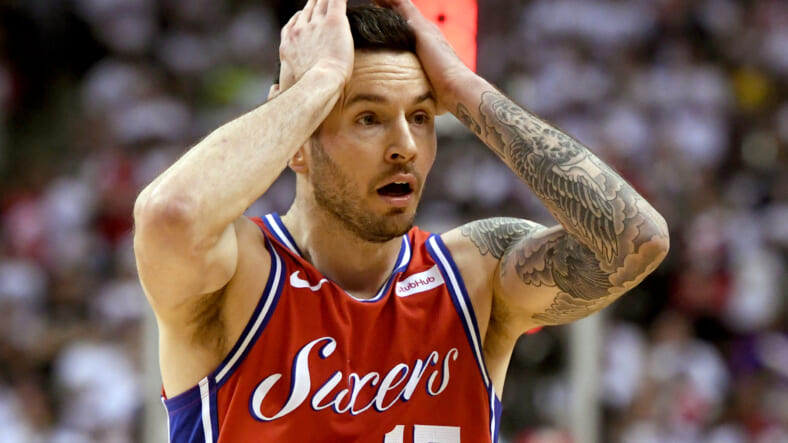 May 12, 2019; Toronto, Ontario, CAN; Philadelphia 76ers guard J.J. Redick (17) reacts after an officials call against the Toronto Raptors in game seven of the second round of the 2019 NBA Playoffs at Scotiabank Arena. Mandatory Credit: Dan Hamilton-USA TODAY Sports

While head coach Tom Thibodeau of the New York Knicks refused to commit to the idea that they could target a superstar prior to the March 25 trade deadline, that doesnâ€™t mean theyâ€™re completely out of the market. The Knicks have been connected to players like Bradley Beal, Zach LaVine, and Victor Oladipo the past few weeks, but making a smaller, less impactful trade could still be on their mind.

Two players the New York have kept her eyes on are three-point specialist JJ Redick of the New Orleans Pelicans and guard Lonzo Ball. Adding a point guard might be beneficial for a team that is currently without Elfrid Payton and Derrick Rose. The moment Rose left the team for personal reasons, they completely imploded against the Milwaukee Bucks. However, second-year guard RJ Barrett has looked phenomenal over the past three games, averaging 25 points, 3.3 assists, and 4.6 rebounds. The Knicks are happily watching Barrett develop into a star at a significant rate, so adding a complementary piece might be in their best interest.

According to Ian Begley of SNY, the Knicks are intrigued by JJ Redick:

Redick is currently in the middle of a down year, averaging just 8.7 points over 18.6 minutes played. While his minutes are down significantly compared to recent years, heâ€™s putting forth his lowest point totals since 2008, when he averaged just 17.4 minutes per game.

His three-point percentage is hovering around .364, the lowest itâ€™s been since 2012, so clearly, either age is getting the better of Redick or simply not playing with confidence in New Orleans.

With family in Brooklyn, making a move to New York would likely be a positive twist for him, and the Knicks might get a revitalized player in the process. He would likely be a cheap add, and utilizing his primary strength from behind the arc should inject a bit more offensive efficiency into the team. I like this move at the right price, but the Knicks need to be careful with their asset allocations.