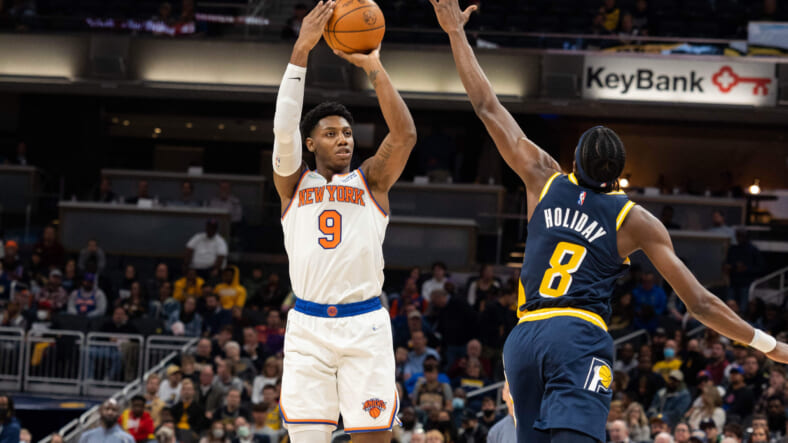 The New York Knicks dropped their second consecutive game against the Indiana Pacers on Wednesday night by a score of 111â€“98. The Knicks trailed for the majority of the contest, closing out the final minutes with plenty of missed shots and poor defensive stands.

With the team struggling due to chemistry issues, lackluster defense, and clear fatigue, they will look to bounce back against the Milwaukee Bucks, a dominant opponent, on Friday night.

Three main takeaways for the Knicks in tough loss to Pacers:

1.) The defense has fallen off a cliff

The Knicks’ defense has had a tough start to the season after being one of the most dominant units in the NBA last year. Going into Wednesdayâ€™s loss, the Knicks ranked 22nd and defensive rating, 25th in steals, and 7th in blocks. They have been woefully awful on transition scoring, and that didnâ€™t change against Indiana, who featured Myles Turner as their sharpshooting big man.

If the Knicks donâ€™t turn this defensive issue around, they will be in a difficult spot. Their offense is inconsistent without elite three-point shooting. They cannot allow themselves to fall into the category of living and dying by the three-point shot.

It seems as if the Pacers ran a similar play the entire game, driving the middle of the defense and kicking the ball back out to Myles Turner, who scored 25 points, shooting 70% from three-point range. He connected on seven attempts, posting 13 rebounds and three blocks. Turner put on a show for a team that was intrigued by his services this past off-season, going as far as to inquire about a potential trade opportunity.

We spoke about the idea of the Knicks trading for Turner at this deadline, who is having a dominant season on both sides of the ball. Their inability to stop scoring big men has been apparent this year, and the Knicks allowed Turner to walk all over them without any resilience.

Third-year guard RJ Barrett entered the game averaging a career-high 18.6 points, 5.7 rebounds, 2.6 assists, and shooting 43% from range. Alas, he continued his offensive master class, adding 23 points and three assists. However, his defense was spotty throughout, which put his team in a bad spot with a lack of communication and overall hustle.

Barrett made it a goal of his to focus on playing premier-level defense, but that hasnâ€™t been the case the past few games, rather focusing on offensive production. While heâ€™s been good on that end, if the team as a whole canâ€™t play a balanced game, the Knicks will continue to lose.