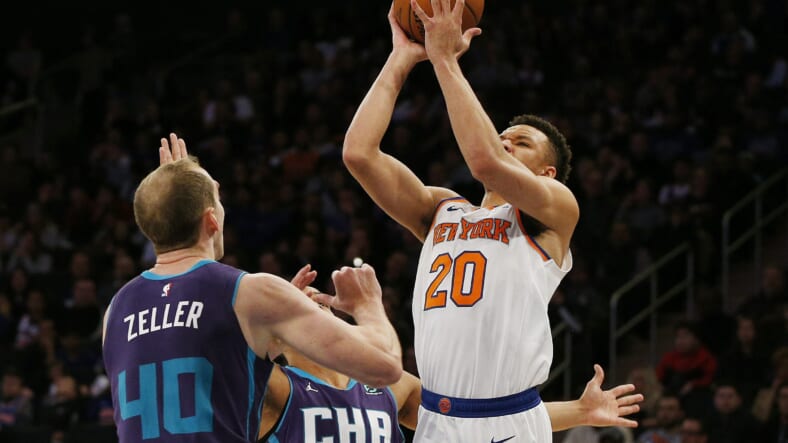 Kevin Knox is trying his best to stay positive after another fall from grace.

He had similar nightmares last year. And Knox is drawing strength from last season’s harrowing experience where his minutes were sporadic.

“Last year was a little low, but I really learned a lot from last year being ready at any given time. Just continue to work no matter how much playing time you get,” Knox told reporters via zoom call after Wednesday’s shootaround in Chicago.

With the Knicks’ veteran wings Reggie Bullock, Austin Rivers, and Alec Burks all healthy, Knox’s path to earning minutes is slim to none as Thibodeau prioritizes winning over his development.

“I know we have a lof great players, and our rotations can get tight. Coach makes a lot of decisions. He’s the head coach, so whatever decision he makes, I gotta respect it,” Knox said.

With Knox back in the doghouse, the former Kentucky Wildcat hopes to earn his way back into the rotation by buying into the team concept.

“I think that’s very important right now — just being the best teammate that I can be no matter how much playing time I get,” Knox said.

“Just encouraging my guys, making sure I help some of the young guys — Obi (Toppin), Quick (Immanuel Quickley), and even some of the older guys if I see something from the sideline. But I’ll always stay ready, working hard in practice, going 100 percent because you’ll never know when my number will be called.”

Even if Thibodeau explained that Knox’s role with the team remains fluid and situational, unlike the case of Dennis Smith Jr., who requested to play in the G League, it’s obvious that the 2018 ninth overall pick’s stock has hit rock-bottom.

View from the bottom

There was a stretch in January when Knox led the league in corner 3, but he has since cooled off. He’s been struggling in the last seven games before his benching, shooting just 3-for-14 from deep.

Knox said he’d got a different view of the game from the bench, taking notes that he hopes to carry on the court when another chance — whenever that maybe — would come.

“You feel a lot of different things from the sideline, honestly. You see a lot of little things that you don’t really see on the court. I think a lot of people can say the same thing,” Knox said.

But four of the players who were picked after him in the 2018 NBA Draft can’t say the same thing.

Mikal Bridges has developed into Phoenix Suns’ swiss-knife army, often tasked to shadow the opposing team’s best player and still has the energy to hunt for his offense.

Knox’s Kentucky teammate Shai Gilgeous-Alexander has become the face of the Oklahoma City Thunder rebuild, while Miles Bridges has been playing a pivotal role in Charlotte Hornets.

Michael Porter Jr. is an emerging star in Denver.

While his Draft batchmates are flourishing, Knox’s chances are vanishing.

“I’m just going to continue to keep working defensively, keep moving without the basketball offensively. Just run around and be aggressive all the time. Like I said, being ready to go in there to play hard, get rebounds, get steals, just make hustle plays, make winning plays so I can get to see my minutes increased.”

“But like what I said, whether I play or not, I just have to be the best teammate that I can be and work hard in practice and workouts. And on off days, make sure I can get shots up and continue to get my reps up,” Knox said about his plans moving forward.

Will these things be enough to earn his way back?