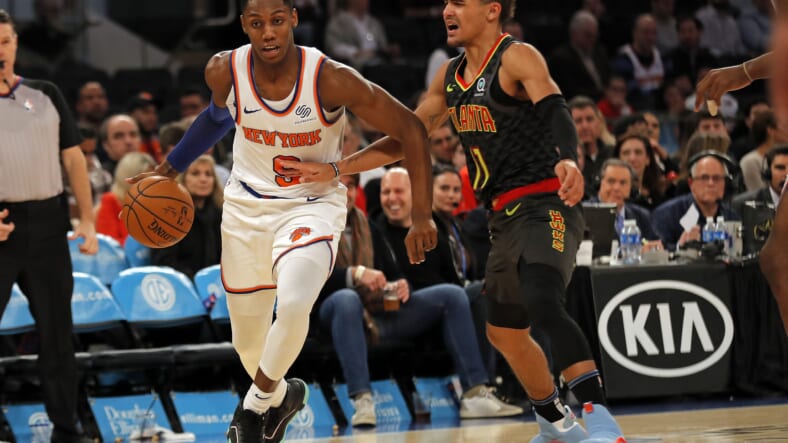 The game started with a â€œF*ck Trae Youngâ€ chant. It ended with a Young game-winner.

Youngâ€™s floater with less than a second left silenced a stunned 15,000 Madison Square Garden crowd as the Hawks stole Game 1 from the New York Knicks, 107-105, on Sunday night.

Julius Randle missed a tough fadeaway jumper at the buzzer that dimmed the spotlight on Knicksâ€™ return to the NBA playoffs for the first time in eight years.

Game 2 of the series, shaping up to be one for the ages, is set on Wednesday at The Garden.

The Hawksâ€™ rising star was spectacular. He toyed around the Knicks defense, delivering a virtuoso performance in his first playoff game. Young scored six clutch points in the final two minutes to bring Atlanta home. He led the Hawks with game-highs of 32 points and 10 assists. He added seven rebounds and committed only two turnovers in 35 minutes.

“I’m looking at it as Iâ€™m doing something right if I’m affecting them with my play that much that they hate me that much,â€ Young said, reacting on the Knicks fans’ heckling. “I just let my game do the talking.”

RJ Barrett and Alec Burks carried the Knicks on the night Randle struggled. For a while, it looked like the Knicks could survive. But Young had enough of the Knicks fansâ€™ heckling and delivered a heck of an ending.

The Knicks bench scored 64 points, with their starters only good for 41. Reggie Bullock joined Randle with a poor outing, misfiring all of his five three-point attempts. He wound up with six points on 3-of-9 overall shooting.

With the ineffective starting point guard Elfrid Payton reduced to just eight minutes and zero points, Rose gave the Knicks a huge lift off the bench. The 32-year old former MVP turned Sixth Man of the Year finalist had 17 points, five rebounds, and five assists in 38 minutes. But he also committed a game-worst five turnovers.

A 2-for-12 jittery start had the Knicks falling behind in the opening quarter. Behind Young’s backcourt wizardry, the Hawks led the Knicks, 24-16.

Then Barrett pumped in nine points in the third quarter, where the Knicks started to wrest control of the game. His highlight dunk over Bogdan Bogdanovic midway the quarter capped a 7-2 Knicks’ mini-run that tied the game at 63 apiece.

Barrett, the youngest Knicks at 20 to play in the playoffs, wound up with a double-double (14 points and 11 rebounds).

Burks picked up from where Barrett left off. The veteran guard scored a playoff career-high 27 points, 18 in the fourth quarter. But it wasn’t enough.

But the Knicks responded with five straight points courtesy of Barrett and a Randle three-pointer that swung the lead back to New York, 98-97, with 2:04 remaining.

It was back-and-forth from there. A Rose floater forced a 105-deadlock with 10.2 seconds left, but it was enough time for Youngâ€™s endgame heroics.

It was an anti-climactic ending for the Knicks crowd that began the night pouring out their bottled-up emotions and energy since the pandemic and the last seven fruitless seasons.

Their â€œF*ck Trae Youngâ€ chants proved to be their undoing as it fueled the Hawks gunner to silence them.