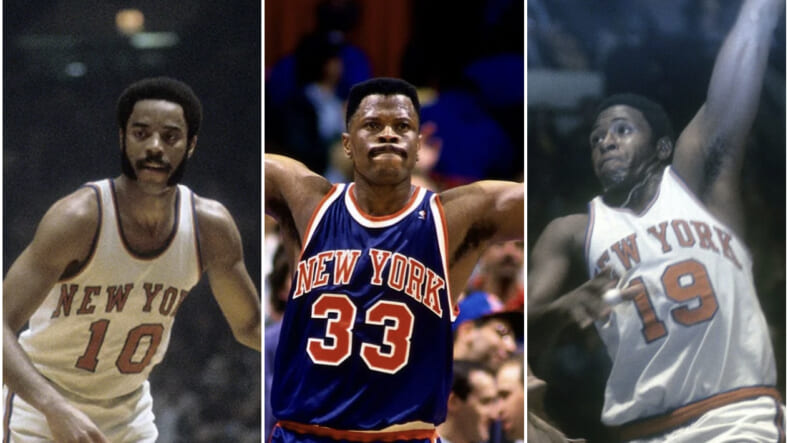 Five members of the New York Knicks championships teams in the 70s and former franchise cornerstones Patrick Ewing and Carmelo Anthony have been named to the NBA’s 75th Anniversary Team, which was announced across TNT and ESPN from Oct. 19-21 as the league tipped off its landmark 75th Anniversary Season.

Walt “Clyde” Frazier, Willis Reed, Earl Monroe, Dave DeBusschere, and Jerry Lucas, all Hall of Famers, have been part of the last Knicks team to win an NBA championship in 1973. Frazier, Reed, and DeBusschere were also members of the Knicks’ 1970 championship team.

Frazier is the Knicks franchise leader in assists, while Reed was the Finals MVP of the Knicks’ two championships. Reed also won the 1970 regular season MVP. He is best remembered for his gusty Game 7 performance in the 1970 NBA Finals. A hobbling Reed inspired the Knicks to beat old rival Los Angeles Lakers for the title.

Ewing, an 11-time NBA All-Star, was the last no.1 overall selection by Knicks in 1985 and the last player in franchise history to win Rookie of the Year. He is the Knicks’ franchise leader in points and rebounds.

Anthony played his prime years with the Knicks in the last decade. He led the team to its last playoff appearance in 2013 before last season’s feel-good, surprising fourth seed finish in the Eastern Conference.

Other former Knicks players on the list are Jason Kidd and Bob McAdoo.

Kidd played his final NBA season with the Knicks in 2013, but he is best known for his time with the New Jersey Nets and Dallas Mavericks, where he won an NBA championship in 2011.

McAdoo joined the Knicks three years after they won their last NBA championship. He played three seasons with the team alongside Frazier and Monroe. But McAdoo is best remembered for his first four years in the league with the Buffalo Braves (now Los Angeles Clippers), where he won Rookie of the Year in 1973 and NBA MVP in 1975. Later on, he won two championships as a key reserve for the Lakers in 1982 and 1985.

Voters were asked to select the 75 Greatest Players in NBA History without regard to position. Panelists did not rank their selections. Current and former players were not allowed to vote for themselves.