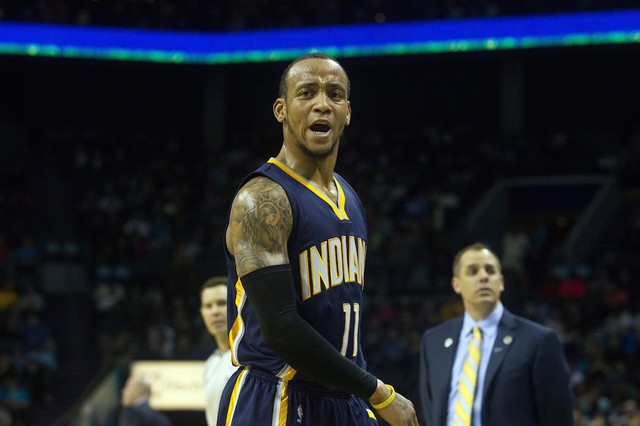 Former NBA star Monta Ellis is set to camp out in Joe Abunassarâ€™s Impact Basketball this week as he ramps up his training in his latest comeback bid.

The 35-year old Ellis will fly to Las Vegas on Tuesday and is scheduled to conduct private workouts in front of at least three NBA teams until Saturday, according to his business manager Derrius Nelson of Dagger Basketball agency.

â€œI have reunited Tae and Joe. They have come a long way since Taeâ€™s early years in the NBA,â€ Nelson told Empire Sports Media.

Ellis is rekindling his partnership with Abunassar that started when the former McDonaldâ€™s All-American player went into the NBA straight from high school.

Since his pre-draft workout, Ellis had been a regular at Impact Basketball during the offseason, including the year when he became the leagueâ€™s Most Improved Player in 2007 that set him off to NBA stardom.

There are still about 17 roster spots left to be filled in the NBA, with the Los Angeles Lakers leading the way with three. Other playoff contenders with open roster spots are the Chicago Bulls, Portland Trail Blazers, Atlanta Hawks, Miami Heat, Phoenix Suns. Young teams that may need veteran leadership like the Minnesota Timberwolves, Cleveland Cavaliers, Orlando Magic, and Oklahoma City Thunder also have roster openings.

Nelson believes that Ellis can provide veteran leadership to a young team or a complementary piece â€” another shot creator and playmaker â€” to a playoff team.

â€œTae is still a reliable source and a dominant factor to any NBA team organization,â€ Nelson told Empire Sports Media.

â€œWhen you talk about how can he fit in on any NBA team right now, he can play the pick and roll game, and he can add playmaking, score in transition, run lanes without the ball. Heâ€™s defensively fast and dangerous offensively if he gets going. He can still light up the scoreboard just as well any of them, like when he had 38 against the late Kobe Bryant in a dog fight battle back when he was playing with Golden State and had 48 points against Oklahoma City with Kevin Durant, Russell Westbrook, and James Harden. He still can do the same damage as he did before.â€

Ellis has career averages of 17.8 points, 3.5 rebounds, 4.6 assists, and 1.7 steals. He has recorded nine 40-plus points games building a reputation as one of the premier shotmakers and playmakers throughout his career.

â€œSo heâ€™sÂ definitely will be a reliable source for anybody. Heâ€™s hit game-winners with Golden State, Dallas, Milwaukee, so he’s definitely clutch. Just think about him with the Nets, Lakers, Clippers, Bucks, or even with the Warriors. How much â€” offensively and defensively â€” will open up for them with Taeâ€™s experience, abilities, and leverage that will lead to at least the conference finals.

During his NBA hiatus, Ellis kept himself fit by coaching kids under his AAU club, Ellis Elite, and training with Dallas-based NBA trainer Djamel Jackson. Jackson will stay in Dallas to attend to Ellisâ€™ AAU club while Ellis pursues his NBA comeback.

In Las Vegas, Nelson said Ellis would conduct a workout simulating live game situations to show how ready and serious he is about this comeback bid.

Ellis said in a previous interview with Empire Sports Media when he announced his NBA comeback bid that he could still play for five years.

At this point, money is no longer a motivation for Ellis, who turned down a lucrative offer to play in China last season and is still set to earn $2.25 million this season from the Indiana Pacers, the last year of his salary stretch provision when he was waived in 2017.

â€œMy main thing is, just bring me in and give me a look. Like you could make the decision on me. I just want a shot. I ainâ€™t asking for a contract to get $5 million, $10 million, or even $1 million. All Iâ€™m asking is, give me a look. Thatâ€™s all and let my game speak for itself. I just want an opportunity, a workout, and thatâ€™s not the end of the world, thatâ€™s not gonna hurt anybody,â€ Ellis said. â€œI will pay my own plane ticket and hotel to go to a workout.â€

Now, Ellis is finally getting his shot. And he doesnâ€™t want to miss it.