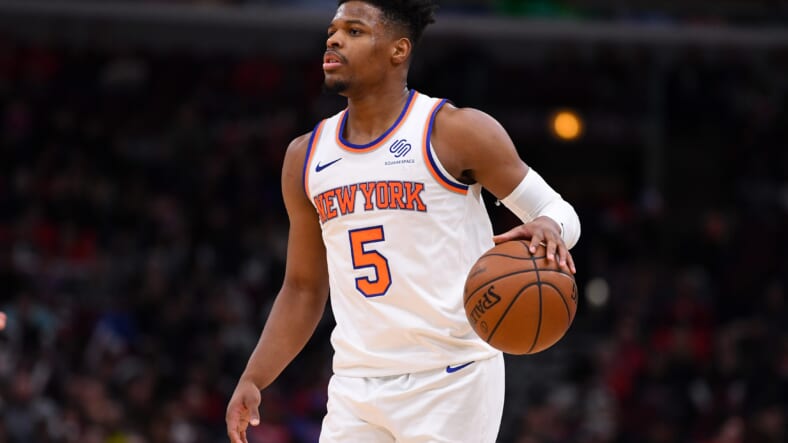 Not in New York. But with his home team, Charlotte Hornets.

The North Carolina native is thriving with his fifth NBA team and will have a shot at redemption against the Knicks Wednesday night.

Smith had an uninspiring one-and-a-half season with the Knicks as part of the Kristaps Porzingis haul from Dallas. He was traded to the Detroit Pistons for Derrick Rose in 2019 which helped the Knicks end an eight-year playoff drought.

Smith became an afterthought, bouncing from Detroit to Portland, until Charlotte gave him a new lease on life.

“It’s exciting because it’s different [here in Charlotte]. This is the first time that I feel like a team has said, ‘alright, let’s try to develop this new guy’, instead of saying, ‘here’s what you got to do.’ Let’s try to develop you in the best way possible.”

His minimum one-year deal proves to be a steal for the Hornets.

Smith has scored in double figures in all three games, taking advantage of LaMelo Ball’s injury and, in Atlanta, Terry Rozier’s absence.

Smith delivered his best game — 18 points, six assists, and three steals — after getting the start in a massive 126-109 upset win over the Atlanta Hawks last Sunday.

Through three games, Smith is averaging 13.3 points, 4.7 assists and 2.3 steals while shooting an insane 71 percent from behind the arc and 57 percent overall.

Rozier’s status for Wednesday’s matchup with the Knicks remains doubtful, while Ball is still recovering from his ankle injury.

They are unbeaten on the road with wins over the San Antonio Spurs and the Hawks while the Knicks are also undefeated at home after two blowouts victories over Detroit and Orlando.

Smith’s tough matchup with his former Dallas teammate Jalen Brunson will spice up the Hornets-Knicks showdown.

Brunson has been good as advertised, looking worth every penny of his new four-year $104 million contract. More than his gaudy numbers — 17.7 points and 7.0 assists — Brunson has brought stability to the Knicks’ backcourt, which Smith and a revolving door of point guards failed to provide.

While it didn’t work out for Smith and the Knicks, the former lottery pick looks like he’s finally found a home with the Hornets.