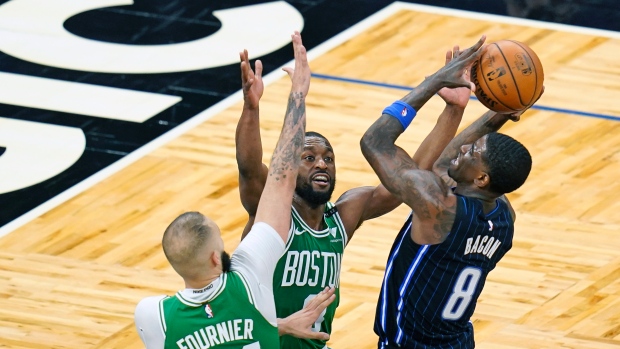 ESPN was the first to report Bacon’s signing with the Knicks Monday. The terms of the deal were not disclosed. It is unclear if the contract is fully guaranteed. The Knicks are allowed to enter the training camp with a 20-man roster but have to cut it down to 15 and two players under two-way contract for the season.

Before this move, the Knicks have 14 players under guaranteed contract and one two-way player in rookie Jericho Sims. The Knicks have until the opening night of the season to guarantee the salary of Argentine guard Luca Vildoza, who is underwhelming so far in the NBA Summer League.

Bacon is coming off a career season with the Orlando Magic, where he played all 72 games and averaged 10.9 points, 3.1 rebounds, and 1.3 assists. But he shot only 40 percent from the field and 29 percent from the three-point range.

He played his first two NBA seasons with Kemba Walker in Charlotte while he was teammates with Evan Fournier in Orlando.

The 2017 40th overall pick, Bacon, has looked up to Walker during his time with the Hornets.

When Walker left Charlotte for Boston in 2019, Bacon reflected on the four-time All-Star’s leadership.

â€œHe doesnâ€™t really play video games,â€ Bacon told The Athletic. â€œHeâ€™s a guy thatâ€™s about business. When the season comes around, heâ€™s locked into the season. The task at hand, thatâ€™s what heâ€™s locked into, thatâ€™s what heâ€™s willing to sacrifice anything else to finish and complete that mission. So when the season always came around, he was always locked into the season. He didnâ€™t really have time for video games. Heâ€™d go back late at night at the gym to put shots up by himself. Heâ€™s just one of those types of guys.â€

Even when Walker was already in Boston, the former Celtics guard frequently checked in with Bacon to keep his spirits up when he was struggling during his third year in Charlotte. Bacon subsequently signed with the Magic a year after Walker left the Hornets.

Now, Bacon hopes to recapture that chemistry again with Walker and Fournier at the Knicks.

Yankee News: What does Correa’s switch to Scott Boras mean for the Yankees?
New York Giants

New York Giants: Could Joe Schoen and Brian Daboll be the future?
wpDiscuz