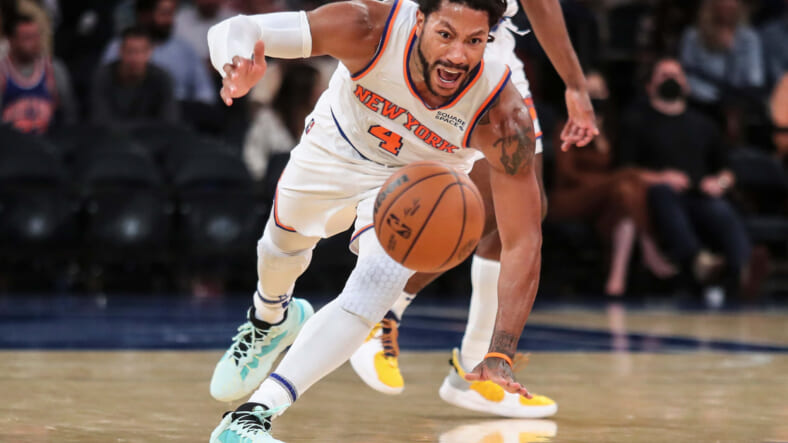 The New York Knicks had several solid contributors in their most recent loss to the Orlando Magic, but that didnâ€™t make watching the film any more exciting. With the team dropping their first game of the season to a lowly Magic team by a score of 110â€“104, going through the pain of watching such poor film should reinvigorate them as they prepared to take on the Philadelphia 76ers on Tuesday evening.

Derrick Rose detailed the pain of going through the film after the loss to Orlando, per the NY Post:

â€œEspecially when you beat a team like we did the first time, it puts you in kind of a depression type of state where youâ€™re thinking about everything that night. Then waking up, coming in, you dread coming in a little bit after you get your work in. The best thing about it though is everyone communicating while weâ€™re going over film. By the end of film, itâ€™s out [of] your mind. You know how these games come right back-to-back, so you gotta have amnesia and try to execute the game plan for tomorrowâ€™s game.â€

Rose pointed to a lack of energy and proactivity as the Knicks’ biggest struggle in the defeat. Jogging and not sprinting back into position played a big part in their demise, which could just be early-season stamina issues, especially with a thin center position.

â€œWhen you look at the errors and all that, itâ€™s a time to grow as a team and build chemistry,â€ Rose said. â€œYou see the breakdowns, you see the jogging back and not sprinting back and all that. It gives you a baseline to see where youâ€™re at and next game, you gotta improve on everything that you did wrong.â€

With Tom Thibodeau as head coach, we should expect to see a reinvigorated and aggressive Knicks team, sprinting and displaying 100% energy against Philadelphia. Overcoming the 76ers and bouncing back would show resiliency for a team that has high expectations this season.