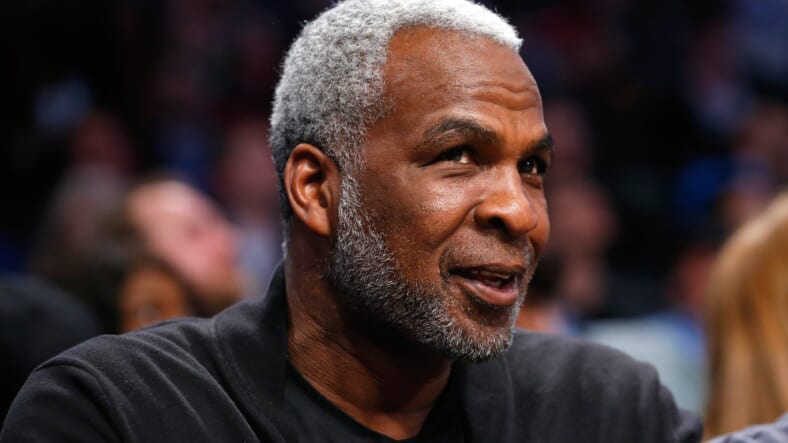 On Barstool radio, Oakley talked about the stats Ewing shouldâ€™ve had since he was giving him the ball.Â  He continued to slander Ewing, trying to make something out of nothing. Listen Oak, you were a great Knick.Â  Now, youâ€™re ruining everything you had with the Knicks organization.

Oakley is probably diverting all of his anger from the Dolan situation onto Ewing.Â  This is ridiculous and completely uncalled for.Â  The Knicks wouldnâ€™t have been where they were to compete in the 90s if it wasnâ€™t for Ewing.Â  Yes, Oakley played a giant roll, as an enforcer, which was great.Â  But these days he’s tarnishing everything he once stood for.

Oakley as all Knicks fans wishing that he would just â€˜shut the (beep) upâ€™.Â  Like seriously, the attention that he wants is sickening.Â  What does Oakley think he was going to do? Be the main guy scoring?Â  In his best season with the Knicks, 1989-90, he averaged 14.6 points per.Â  That ainâ€™t cutting it to be the main guy.Â  He was the rebounder and enforcer.

Some may believe that Oakley might have a point and Ewing did need him.Â  However, Ewing was the driving force of the Knicks.Â  Heâ€™s a New York legend.Â  And Oakley had a great reputation with the team, key word had.Â  If Oakley thought he was more as a player then he shouldâ€™ve stepped up at the time.Â  Why bring up your thoughts about the team 30 years after the fact? Itâ€™s to bring more attention to yourself.

Those 90s Knicks were the iconic and the most fun the organization has had in decades.Â  Oakley is trying to tarnish that legacy for his own personal gain.Â  However, in his mind, he may think heâ€™s right but most of the New York Knicks fan base is sick of his antics.