Cam Thomas is eager to prove he’s more than a scorer I LSU star opens up about meeting with Tom Thibodeau, Knicks 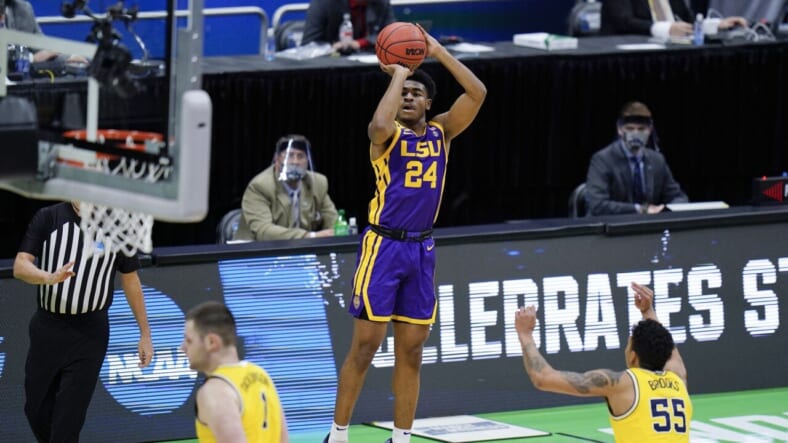 LSU star Cam Thomas is an elite three-level scorer. Will the New York Knicks take a flier on him after a solid workout and meeting?

Cam Thomas is an irreverent scorer. He has irrational confidence reminiscent of the late Kobe Bryant, a cold-blooded scoring assassin in the NBA who went down to become an all-time great.

It’s not hard to see why he wears No. 24 because he grew up idolizing the late Laker legend. Now, he has shifted his eyes on Phoenix Suns’ Devin Booker, a known Black Mamba disciple on top of his other current favorite NBA players.

“Throughout the NBA playoffs, I’ve been watching Devin Booker,” Thomas said on Monday during his NBA Draft media availability.

He’s been paying attention to his footwork, the way he glides in the perimeter, and creates space for himself and others. He watches how he launches his threes.

“I like to pick up some of his moves in the midrange and just really trying to look at his game because we play very much alike and similar,” Thomas said.

Aside from Booker, he’s watched a ton of Kyrie Irving and James Harden and a little bit of Bradley Beal. “I really watch those guys a lot and take from them the most,” Thomas said.

This draft class’ microwave scorer has paid attention to the star bucket getters while scouts have often compared him to Lou Williams, a role player whose instant offense off the bench won him three Sixth Man of the Year awards. While it has some weight to it after emerging as a prolific scorer in LSU and nothing much else, Thomas says he’s more than just a three-level scorer.

“I feel like those analyses were totally wrong. Itâ€™s just the system I was in. I feel like nobody really knows the room for [my growth] as a player. Iâ€™ll just keep going and prove them wrong. I feel like I can do that [in the NBA] because Iâ€™ve done it before,” Thomas said.

But despite those accolades, Thomas isn’t viewed as a lottery pick because of his perceived tunnel vision. He averaged 3.4 rebounds and just 1.4 assists.

Thomas insists he has more to show, and that was just a product of the system he was in college.

“[I wasn’t able to show] really playing without the ball in my hand. I feel like I can do that at the next level,” Thomas said. “Again, getting my teammates involved. I really didnâ€™t show that in LSU because my role is to be the primary scorer. I feel like when I get to the NBA, I have to show that first and then build from there.”

Thomas has always been a scoring machine. He left Oak Hill Academy as the program’s all-time leading scorer surpassing Kevin Durant and Carmelo Anthony. But buried under those eye-popping 26.2-point and 31.5-point scoring averages in his two years there were the identical 3.4 assists he dished out per game.

“I feel really good about [my playmaking],” Thomas said. “Being a scorer kind of opens up for me to make plays for others because everybody worries about me putting the ball in the basket and scoring. Me just having that skill helps up my other skills as far as making plays for others. I just try to attack and get quick buckets.â€

Sure, some teams need bucket getters. One of them is the Knicks, who struggled to score when they reached the NBA playoffs for the first time in eight years.

Thomas had the Knicks’ attention. He’s one of the many prospects they invited at their Tarrytown practice facility in New York. But they’re also one of the few teams Thomas met ahead of the NBA Draft. So far, Thomas has met with the Lakers, Atlanta Hawks, Golden State Warriors, Indiana Pacers, Charlotte Hornets, and the Memphis Grizzlies aside from the Knicks.

“I met with the Knicks, which was my second workout like a few weeks ago. It went really well,” Thomas said. “I see myself fitting in with the Knicks because I was told they needed a bucket getter, a player who can make plays at the end of the shot clock in a game, itâ€™s just a closer type so I see myself coming in, being the scorer I am, I can help the team.”

Thomas can provide an instant boost to a Knicks offense that relied heavily on Julius Randle last season. The LSU standout came away from that meeting, believing he could have a bright future with the Knicks if ever they pick him.

“Coach Thibs was in the meeting so we talked about the good stuff and it was really a good conversation. I donâ€™t know everybody. But it was a good dialogue.” Thomas said. “I feel like I can fit in really well because he believes I can fit in his system and I feel like I can shoot soâ€¦ weâ€™ll see on Thursday.”

As he prepares for the NBA Draft on Thursday, Thomas continues to work on his game in between the teams’ workouts trying to improve on everything from scoring to rebounding and playmaking. But on top of that, heâ€™s got two priorities.

“[I’m] just trying to get into shape as much as possible. Youâ€™re never in too much shape so Iâ€™d like to be in top shape so I can be on the court without being tired. Trying to lock in on the ball defensively, I keep working on that and just those two things. I wouldnâ€™t call those weaknesses because itâ€™s just mental stuff,” he said.

Thomas is a certified bucket getter, but he’s eager to prove he has more to offer.

While he has the late Laker legend’s scoring instincts, his irrational confidence comes from his strong work ethic and military discipline cultivated by his mother, Leslie Thomas, an army veteran.

“I put in a lot of work and for how much Iâ€™ve put in, I should be confident,” Thomas said.