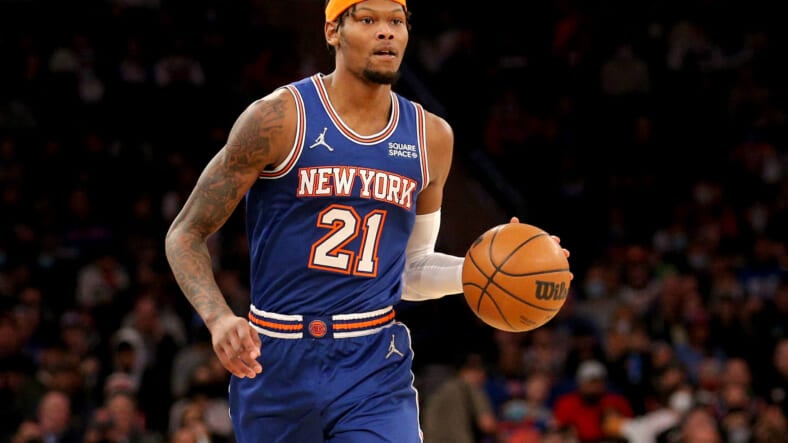 Reddish vehemently denied a New York Port story that “he wants a change of scenery” again, just a few months after the Atlanta Hawks granted his trade request sending him to the Knicks.

Replying to a comment from a Knicks fan on Instagram, Reddish said: “When [did] I do that? You all be tripping.”

Reddish, the 10th overall pick in 2019, doubled down on Twitter: “Idk (I don’t know). What’s up with the media? How are they going to lie on my birthday? Crazy world, man!”

The Knicks acquired Reddish from Atlanta last February in exchange for Kevin Knox, also a former lottery pick who never panned out in New York, and Charlotte’s top-18 protected first-round pick, which did not convey in the last draft. The Hawks, however, flipped that pick to the San Antonio Spurs as part of the package that landed them Dejounte Murray. It will convey in the next year’s draft if the Hornets land outside the top 16.

Reddish sought a trade out of Atlanta in search of a starring role, which he didn’t find in New York. His situation worsened as he was initially out of Tom Thibodeau’s rotation. And when he had a chance to sneak into the rotation, he suffered a shoulder injury one game after playing his best game in Knicks uniform (17 points in 25 minutes in a 116-93 win over LA Clippers).

In 15 games with the Knicks, the 6-foot-8 Reddish averaged a career-low 6.1 points on 41.5 percent field goal shooting and 25.6 percent from the three-point zone.

Reddish appears to be on the outside looking in again after team president Leon Rose did not pull the trigger on a Donovan Mitchell trade that could have stripped the Knicks of rotation players and draft capital.

As currently constructed, the Knicks are set with a starting unit of Jalen Brunson, Evan Fournier, RJ Barrett, Julius Randle and Mitchell Robinson. Reddish, if not traded, will have to fight for scraps as the second unit will likely be composed of Derrick Rose, Immanuel Quickley, Quentin Grimes, Obi Toppin and Isaiah Hartenstein.

The Knicks flirted with re-routing Reddish to the Los Angeles Lakers in a three-team deal with the Toronto Raptors at the trade deadline. However, the trade reportedly fell through at the last minute with the insistence of the Knicks to squeeze an extra pick.

Whether he likes it or not, a change of scenery again might be the best thing for Reddish.