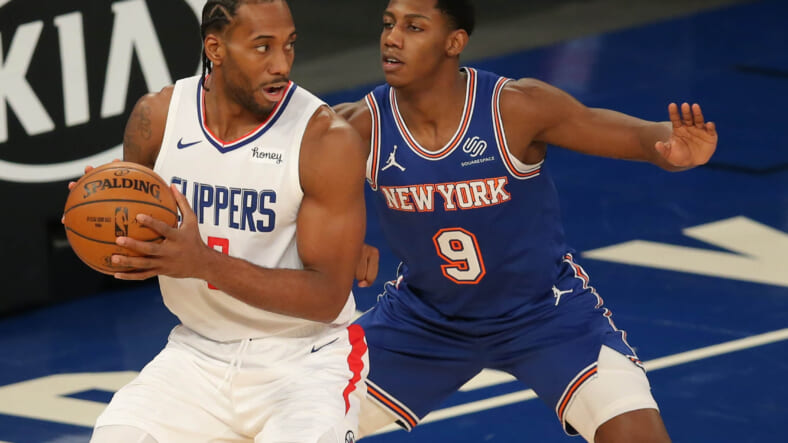 New York Knicks former lottery pick RJ Barrett wants to be known as a two-way player and become one of the top perimeter defenders. This season will give him that opportunity.

“That’s the challenge,” Tom Thibodeau said after Thursday’s practice. “To continue to challenge him, to grow and get better.”

When Reggie Bullock took his long locks and defensive lockdown mentality to Dallas, the onus was on Barrett to step up to the plate.

Evan Fournier is a shiny upgrade than Bullock. But despite Bullock’s limitation on shot creation, he was the bedrock of the Knicks’ perimeter defense last season. According to ESPN stats, his 3.74 Defensive Real Plus-Minus (DRPM) was the second-best among all small forwards in the league.

Barrett landed third among all shooting guards (though he spent most of his playing time as a small forward) with 3.00 DRPM, while Fournier was so far behind, at 26th spot with 0.16 DRPM.

Last season, the Knicks vaunted defense under Thibodeau finished third, tied with the Utah Jazz, in defensive efficiency allowing only 105.7 per 100 possessions, according to ESPN’s Hollinger team statistics. The Los Angeles Lakers (104.8) and the Philadelphia 76ers (105.1) were the only teams ahead of them.

Bullock and Barrett, along with Julius Randle, were the constants in the Knicks’ top three best defensive lineups, per Cleaning The Glass.

With Kemba Walker and Fournier expected to start at the backcourt, there’s trepidation that the Knicks defense will sag this season. Barrett earlier said he’s more than willing to step up and take on Bullock’s role as their top wing defender if Thibodeau calls his number.

“I think each year you learn and I think he has a better understanding of the tendencies of players. I think he understands schemes a lot better. He’s gotten stronger,” Thibodeau said, “but I think it’s a challenge for the entire team to stay locked in and improve. There’s a lot of things we can do better.”

Barrett’s big jump in DRPM from his rookie year (-2.68, ranked 132nd) to his sophomore season showed his enormous appetite for growth. According to Cleaning The Glass, 97 percent of Barrett’s minutes last season were spent as a small forward, with the Knicks allowing 108.6 points per 100 possessions which ranked in the 87th percentile.

While Fournier brings “Judo toughness” to the Knicks, the Frenchman is more a bucket-getter than a lockdown defender. He gives up at least 9 to 10 pounds in heft to Barrett and three inches in wingspan. Barrett’s stocky 6-foot-6 (that could still be growing), 214-pound frame, and 6-10 wingspan better resemble Bullock’s attributes.

After Barrett, rookie Quentin Grimes figure to be their next best bet as a defensive stopper in the wings. He comes with a reputation as a solid two-way player after spending two seasons under former NBA coach Kelvin Sampson, who coaches as hard as Thibodeau. But in a roster as deep as the Knicks have this year, it’s hard to imagine Thibodeau giving Grimes a long leash during his rookie year.

Thibodeau has a pragmatic approach to mitigating the loss of Bullock, and in part Payton, in their bid to remain among the league’s top-tier defense after choosing to upgrade their offense with Walker and Fournier. There is pressure for Barrett to take another leap defensively, but Thibodeau is not putting it entirely on his shoulder.

“I think it’s important for us to approach it as last year is last year, this year is a new, different year. And it’s important for us to start with a zero base to know that we have to put the work into this. It’s very difficult to guard in this league individually. Collectively, what you can do as a team? And so everyone has to understand their job is to go out there and execute their part,” Thibodeau said.

“If one guy is not doing his job, it will break down. It doesn’t matter whether it’s a defensive transition, pick and roll defense, catch and shoot defense, low-post defense, whatever defense you’re in, it’s gotta be five guys tied together.”

Aristotle once said: “The whole is greater than the sum of its parts.” And it rings true with this Knicks team under Thibodeau.

The Knicks were at their best last season when they played like a ‘string defensively’ as Walker described them Thursday. But having an elite two-way wing can bring the Knicks closer to title contention.

The jury is still out on Barrett. But embracing the challenge is a good start.