Why the New York Jets should be all-in on CB C.J. Henderson 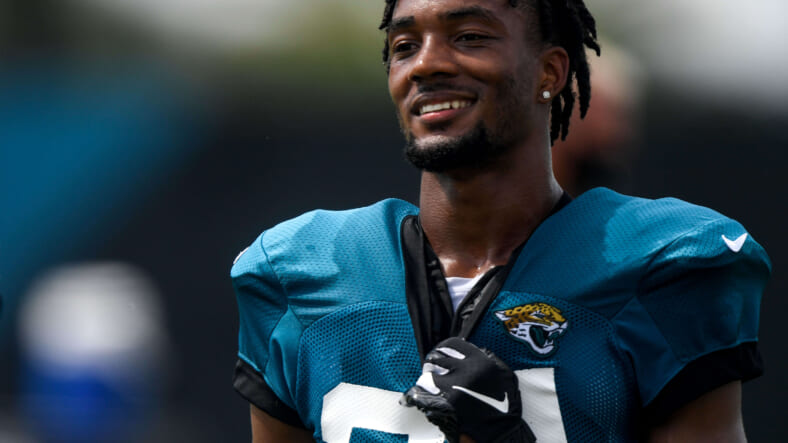 The New York Jets’ secondary situation is already packed with question marks. They might as well add one with a little potential.

Could the New York Jets find one last present under the offseason Christmas tree?

According to a report from ESPN’s Jeremy Fowler, the Jacksonville Jaguars may be ready to deal cornerback C.J. Henderson after a single season in Duval County. Henderson, set to turn 23 in September, was drafted ninth overall in the 2020 draft and earned 36 tackles and an interception over eight games in his rookie year.

Several teams are likely set to inquire about Henderson’s services, with New Orleans emerging as an early collaborator. But Henderson and the Jets could be a match that improves the metropolitan outlook in both the short and long-term.

The Jets’ road to recovery from the 2020 season was graced with a cap space surplus. But while Gang Green spent that money wisely…using the funds to noticeably upgrade their receiving corps and pass rush…last year’s two-win effort conjured from the depths of the football netherworld made any kind of instant fix impossible. Even with the windfall, it was a guarantee that some area on the depth chart was going to get the short end of the offseason stick.

One doesn’t need to look at the depth chart too long to see that the secondary, particularly the cornerback slots, was the sacrificial lamb. The Jets are set to go into the season with Bless Austin and Bryce Hall in the top spots (alongside Javelin Guidry in the Nickel) with a hodgepodge of journeymen (Corey Ballentine, Lamar Jackson, Elijah Campbell) and draft weekend Saturday additions (Michael Carter II, Jason Pinnock, Brandin Echols, Isaiah Dunn) set to back them up.

Henderson could already be a crucial turning point of his NFL career: chosen in the top ten of the virtual draft, the Florida alum was expected to fill the void that Jalen Ramsey and A.J. Bouye left behind. He lived up the hype early on, earning an interception and three pass breakups in the Jaguars’ opening weekend win over Indianapolis. But after inconsistency and injuries swallowed up the rest of his freshman campaign and Jacksonville may already be cleaning house from the Doug Marrone/Dave Caldwell era.

If Henderson were to move on from one new regime (Urban Meyer/Trent Baalke) to another (Robert Saleh/Joe Douglas), he’d give his new tri-state area employers some strong man coverage experience. Henderson’s targets drew a sub-75 passer rating in three of his first five contests (including 24.1 in the aforementioned debut against the Colts). Saleh’s new schemes are set to put a focus on zone endeavors, but a little diversity never hurt.

Hard to find a more natural looking CB in man coverage than CJ Henderson. Has a real chance to be a top 15 prospect in the 2020 NFL Draft. pic.twitter.com/URkRfp7yhE

The Jets are packed to the brim with questions at the cornerback spots. Henderson doesn’t solve the Jets’ experience issue at cornerback…special teams ace Justin Hardee is the only one listed with at least four years of NFL experience…but there’s a healthy amount of proven potential around him from his days with the Gators. With the unproven Saturday picks Austin and Hall (23 starts over a combined three NFL seasons) set to play major downs, the Jets could use someone with a little bit of upside, especially one with the potential to contribute in both the short and long-term future.

For one thing, it’s not like character issues or unreasonable demands are playing a role in Henderson’s possible departure. Unlike many early divorces between a team and its primary picks, there appears to be no ill will between him and the Jaguars. Henderson’s Jacksonville career could become a victim of being in the wrong place at the wrong time, as the Meyer-Baalke duology might simply be purging big picks from the Marrone-Caldwell cabinet (especially because they used a second-round choice on Tyson Campbell). Entering his second season and with a decent enough rookie season (he was tied for fourth amongst rookie cornerbacks with six breakups despite missing half the year), Henderson’s early semi-redemption story is one that the Jets can afford to ghostwrite.

If the Jets do opt to enter the potential Henderson sweepstakes, the question then turns to the price tag. Including Jamison Crowder in hypothetical trades went out of style after restructuring his deal, but the Jets’ stockpiling of future assets could come up big if they’re looking to make a late summer splash.

Douglas has built a solid savings account over his three years as the Jets general manager. The Jets currently occupy 13 spots on the 2022 draft board, but quantity doesn’t always equal quality…the Jets learned this less the hard way through the (John) Idzik dozen.

The Jets, unlike other suitors, have plentiful draft capital to work with, football currency that can be used immediately. The unusual situation of trading a top ten after his debut year could raise the price tag, but that still works in New York’s favor: seven of those picks come in the first four rounds. Dealing away the last first-round choice gleaned from Seattle’s Jamal Adams deal is probably off the table, but the extra second-round choice from Carolina (in exchange for Sam Darnold) could come up big.

Henderson isn’t the proverbial “one move away” to a playoff appearance, but is an affordable piece (just over $16 million left on his rookie deal over the next three seasons) that is blessed with big-play potential. The team is still in the midst of a rebuild, but late moves have raised the immediate promise of this group. A playoff appearance would still be too much to ask for…especially with the budding divisional dynasty brewing in Buffalo…but adding Henderson would definitely push them a few steps forward. They were able to do that on offense when they addressed the neglected right side of the offensive line and signed Morgan Moses in July. Henderson can help the Jets feel better about one of the more exposed areas on the roster.

It’s rare the Jets can take advantage of an early parting between a top ten pick and his original employers. They have the resources and the need…now’s the time for action.