Why are the New York Jets connected to free agent running back Devonta Freeman? 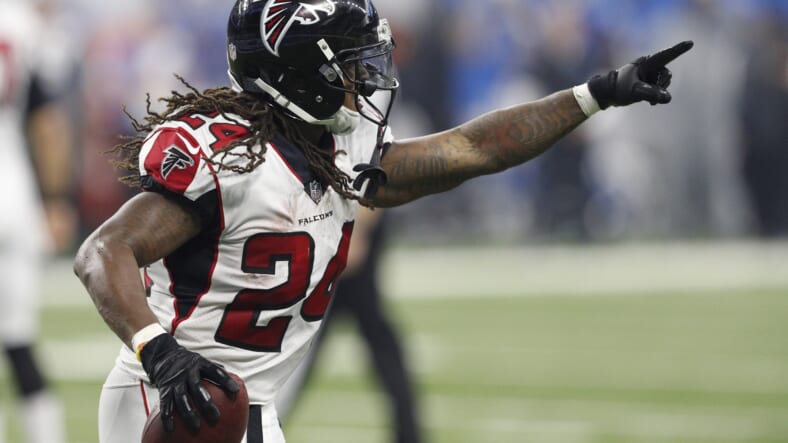 The New York Jets have no need for another starting running back, but reports have indicated their interest in Devonta Freeman. He formally played for the Atlanta Falcons over the last six seasons. Freeman has had immense success with Atlanta in the past, but he fell off in 2018, playing in just two games due to injury.

The Jets’ interest in the veteran running back comes as a surprise, but Freeman is capable in some categories. In 2019, he posted an 84.3 catch rate, attesting to his success in the passing game. Aside from Leâ€™Veon Bell, the Jets donâ€™t have another elite pass-catching running back, and while Frank Gore could fit that role, his age will undoubtedly take its toll.

Why would the New York Jets even consider signing Devonta Freeman?

Signing a player like Freeman would indicate the Jets are all in on winning in 2020, and considering the amount of money they invested in their offensive line, it seems they are prepared to leave it all on the field. They have a solid defense, a new left tackle, a healthy quarterback, and a new possession wide receiver in Denzel Mims.

Nonetheless, despite Freemanâ€™s adequacy in the passing game, heâ€™s coming off one of his worst seasons as a bonafide starter. He averaged just 3.6 yards per carry and 46.9 yards per game in 14 appearances. Heâ€™s four years removed from his best season in the NFL and playing at a level worthy of top running back consideration. At 28 years old, he still has plenty of untapped potential, but it seems he might be out of his prime after injuries hurt him in 2018.

While I believe this is just due diligence by general manager Joe Douglas, it canâ€™t hurt to explore all options, especially if Freeman is available on a cheaper deal. I fully expect Adam Gase to implement a multiple running back scheme that includes Gore consistently on specific plays.

I would like to see Perine get some live action at some point, but I anticipate Bell will be the workhorse and act as so. They might try to take some of the pressure off his shoulders, considering the beating he took last year behind a terrible protection scheme.